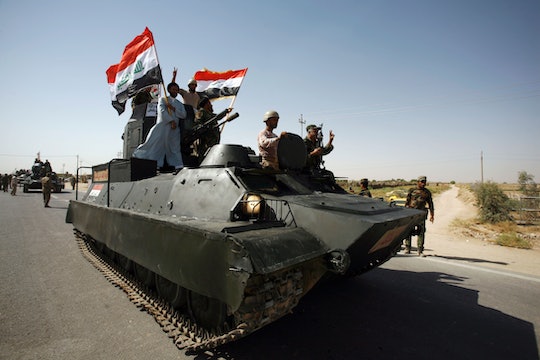 The Mosul ISIS Operation: What You Need To Know To Understand The Military Campaign

Monday marked the beginning of a major military offensive in Iraq as Kurdish forces approached the city of Mosul from the southeast in an effort to free the city from ISIS control, according to reports at CNN and other media outlets. The Mosul ISIS operation is a major moment in the larger war against ISIS. With that in mind, here's a breakdown of what you need to know to understand the unfolding military campaign.

The Battle for Mosul began early Monday morning, when 4,000 troops, consisting primarily of Kurdish Pashmerga fighters, began to retake villages to the south of Mosul, the second largest city in Iraq. The Sunni-majority city has been under ISIS control since June 2014, when ISIS militants, comprised mostly of Sunni jihadists, took the city quite easily from the Iraqi Army, according to The New York Times. The current operation to recapture Mosul from ISIS would be the capstone of a long year of intense fighting in Iraq: The cities of Tikrit, Ramadi, and Fallujah have all been re-taken from ISIS in the months since April 2015.

“The Iraqi flag will be raised in the middle of Mosul, and in each village and corner very soon,” Iraqi Prime Minister Haider al-Abadi said early Monday morning during a televised speech on state television.

The Mosul operation is unique because the Kurdish Peshmerga forces are working in close tandem with the Iraqi counterterrorism forces, according to The Guardian. This initial part of the offensive is being led by the Kurds, though once the assault on Mosul itself begins, the Peshmergas will be joined in large numbers by the Iraqi Security Forces. According to CNN, as many as 100,000 troops could become available for this operation, though far less than half will actually be involved in taking over the city. A senior US official told CNN that these forces include 54,000 Iraqi Security Force members, 40,000 Kurdish Peshmerga fighters, and 14,000 fighters from Sunni, Christian, Turkmen, and Yazidi paramilitary units.

The Guardian reported that in an address to his troops on Monday, Masoud Barzani, the president of the Iraqi Kurdistan region, noted, "This is the first time the peshmerga and Iraqi forces have worked together against Daesh [Isis] … we hope this will become a concrete foundation for our future relations with Baghdad."

The coordinated coalition massively dominates the ISIS fighters in terms of raw numbers. US military officials estimate that while there are likely only 5,000 ISIS fighters in Mosul, they should not be underestimated: they are willing to carry out suicide attacks and use the civilians of Mosul as human shields.

As for Mosul's estimated 1 to 1.5 million residents, Reuters reported on Monday that the UN High Commissioner for Refugees (UNHCR) warned that up to 100,000 Iraqis may flee the city in the wake of the assault. The Commissioner urged the international community to assist with the imminent refugee situation. In anticipation of this situation, The New York Times reports that the Iraqi government has provided instructions to the citizens of Mosul via radio announcements and leaflets dropped on the city. According to The Times,

The leaflets gave a long list of instructions: Put tape over windows in the form of an X to prevent shattering. Disconnect gas pipes. Hide jewelry and money. Stay on low floors. Tell your children that the loud booms are just thunder... And for the young men of Mosul, the government had a special instruction: Rise up against the Islamic State when the battle begins.

CNN reports that when it comes time to enter Mosul, only "Iraqi army troops and members of the national police force" will be involved at that point. This is part of an effort to prevent "sectarian retribution" when the city's inhabitants face the incoming military forces. According to The Guardian, a major concern is that the inhabitants of Mosul, a Sunni-majority city, will clash with Shiite militia if they were to be part of the conquering army.

A recent editorial at The New York Times expressed the same fear, stating that residents of Mosul "would even join the Islamic State" and fight against the city's liberators if Shiite militia were involved.

The local Iraqi forces are supported by U.S., British, and French air support and special forces, according to The Guardian. Of the 5,000 U.S. troops in Iraq, about 500 are directly involved with the mission, working primarily on air support, logistics, and special operations. In a statement to the press, Lt. Gen Stephen Townsend, the commander of US military operations against Isis, estimated that the offensive in Mosul "will likely continue for weeks, possibly longer."

However long this battle continues, it's certain that the world at large will watch the events unfold with a collectively held breath. In a geopolitically complex world, the fight against ISIS is a rare uniting force.