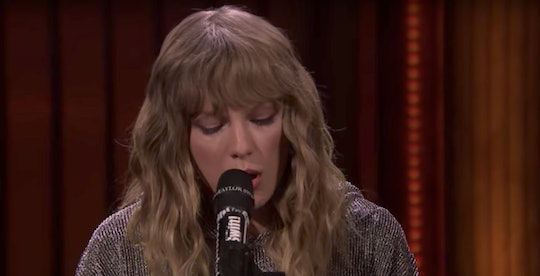 America's former sweetheart and current pop music savior is back, and performing once again. Since Taylor Swift's new album dropped, she's appeared on Saturday Night Live and performed a special song in her home broadcasted on ABC. But then, on Monday night, she took things to a whole new level. Grab some tissues, because Taylor Swift's surprise performance on The Tonight Show Starring Jimmy Fallon will most definitely bring you to tears.

Swift's performance on The Tonight Show proved that, despite the snake-like persona she has taken on, (after, ya know, haters called her one for not liking being called a b*tch in front of the whole world), she is still very much the warm-hearted, loving songstress she has always been. According to a writer and producer for The Tonight Show, Mike DiCenzo, Swift graciously accepted the last-minute invitation to perform on the show, the first episode since Fallon took a break following his mother's death.

While she also performed one of her more upbeat singles — "...Ready For It?" — she slowed things down for a piano-fueled version of "New Year's Day." As BuzzFeed reported, it was during this song that Swift's lyrics took on even more emotional meaning, something DiCenzo took to Twitter to explain.

DiCenzo explained in his Twitter thread that, before Swift took the stage, Fallon took a moment to pay tribute to his mother, Gloria. "When we were little, my mom would walk us to the store, and we would hold hands," he began. "And she would squeeze my hand three times three times, and say 'I love you.'" he explained. "Last week, I was in the hospital, and I grabbed her hand and squeezed. 'I love you.' I knew we were in trouble."

If that story isn't enough to tear you apart, just wait. As DiCenzo tweeted, the showrunners asked Swift to perform "on a complete whim, since she had been in town doing SNL. She said yes with zero hesitation." And then, since no one on set had heard "New Year's Day" before, what happened when she took the stage overwhelmed just about everyone. Why? Well, not only is the song emotional in and of itself, but there's actually a line that goes:

Squeeze my hand three times in back of the taxi, I can tell that it's gonna be a long road.

Yeah, I'll let that sink in.

Basically, Monday night's show was hard on Fallon, and Swift's performance was a kind of emotional release no one really saw coming. And while Swift didn't say much, her hug with Fallon after the song said so much.

Swift doesn't talk about it much, but she had her own health scare with her mom several years ago when Andrea Swift was diagnosed with cancer. So, Swift's performance of "New Year's Day" wasn't a coincidence. After all, she could have performed any song off of Reputation, but she chose the one with the repeating line, "Hold on to the memories, they will hold on to you." Take that how you will, but it's probably safe to assume that she wanted to show her love and support for Fallon.

Here's the thing, Taylor Swift knows exactly what you think about her and her "ruined" reputation. That's precisely (one of) the points of her new album. Well that, and the fact that the world doesn't know her — not really.

As her heartfelt performance on The Tonight Show makes extremely clear, Swift will always be full of love and support, even when so much of the media has painted her out to be the villain in recent years. At the end of the day, Swift's performance wasn't a publicity stunt or a cry for attention. It was a friend being there for another friend, and that's a gorgeous thing.