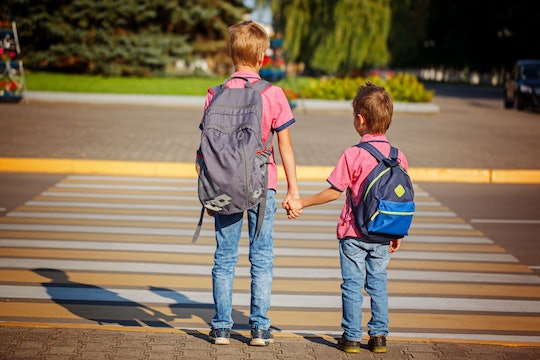 When I was probably about 8 or 9 years old, I remember summer vacations filled with riding bikes with my best friend. We rode all over the our subdivision — and even about a mile away to the local swimming pool. All by ourselves. These days, though? Well-meaning community members are often compelled to call law enforcement if young children are unsupervised in a public space. Heck, parents could even face legal repercussions for child negligence. Because the truth is, society has gradually become one of helicopter parents over the past 20 years. However, the nation's first "free-range" parenting law recently passed and, to me, it seems like common sense.

As the Deseret News reported on March 17, Utah became the first state to pass a "free range" parenting law. The measure — which passed unanimously by the Utah State Legislature and then signed by Gov. Gary Herbert last Friday — will go into effect on May 8. This groundbreaking law will allow children to be unsupervised while walking around the neighborhood or playing at the park. You know, without the threat of the Division of Child and Family Services (DCFS) knocking on parents' doors if someone reports kids being out alone.

If you're like me, you're sitting there scratching your head, thinking, "Wait, what? You mean this was technically illegal before?"

The answer is yes — yes, it was. Apparently, lawmakers in Utah decided to tackle the topic of free-range parenting after parents (in different states) started being investigated for negligence when people reported them for their children being left outside unsupervised, as Fatherly reported. Some parents in these cases even lost custody of their children for a short time. In 2017, Arkansas had considered a similar bill — however, it didn't quite make it. And in 2015, Utah Sen. Mike Lee added an amendment to a federal education bill allowing kids to walk home from school without parents having to worry about being arrested for negligence, as Fatherly reported.

Here's a look at what Utah kids are able to do now, as Lifzette.com reported:

As many Twitter users alluded, it's sort of ridiculous that such a law is necessary in the first place.

It's hard to argue that this isn't a major win for free-range parenting gurus — like Lenore Skenazy, author of the 2010 book, Free-Range Kids, who literally came up with the term. On March 20, Skenazy reacted to the news of Utah's new law on her website, writing, "Friends, it has happened. We have changed the course of parenting — and law. She continued:

Loving moms and dads in Utah do not have to worry that they will be arrested or investigated simply for trusting their kids to walk to school, play outside, go to the park. Only 49 states to go!

Still, not everyone is totally on board with the new law in Utah. “Right now, parents have pretty much all the liberty they need to parent as they see fit,” Salt Lake County District Attorney Sim Gill said, according to The Salt Lake Tribune. He continued:

If such a law isn’t worded carefully, it could become a defense for parents in child abuse cases. We want to be careful this ... doesn’t comprise our ability as prosecutors to hold abusive parents accountable.

Here's the thing: The Utah law doesn't provide a specific age at which children are allowed to be out and about without supervision. The new law doesn't include a specific age minimum, but leaves it up to law enforcement to take into account the situation at hand, as the Deseret News reported. The new bill applies to a child "whose basic needs are met and who is of sufficient age and maturity to avoid harm or unreasonable risk of harm, to engage in independent activities," according to the legislation. So, I have to wonder where they might draw the line. Is it concerning for a 5-year-old to be walking around alone? What if the child looks younger (like I did as a kid.) Hmmm.

Granted, my kids are still relatively young — 6, 4, and 2 — but I'm not sure when/if I'll ever be comfortable with them roaming the neighborhood without me. (18 sounds about right to me.) Joking aside, it's a tough thing to nail down for sure because there are so many factors to take into consideration aside from age. The child's maturity level, the crime rate of the area you live in, how long kids are unsupervised, etc., all come into play, here. Still, I think Utah is onto something with adopting a "free-range" parenting law.