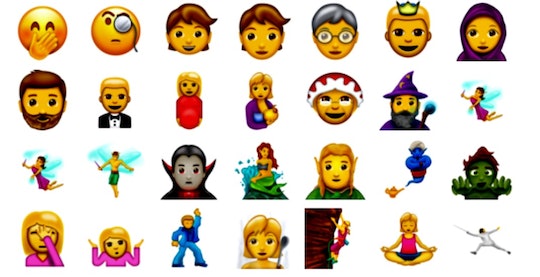 Breastfeeding mothers, rejoice. The new breastfeeding emoji is almost here, so now you'll have a way to quickly tell your contacts that your hands are a little too full for a heavy group message text. That alone deserves a little prayer hand emoji in celebration, no? The Unicode Consortium, which dictates all of our emoji, is releasing a new update at the end of June, but Emojipedia has already released some mock ups of what each new addition is likely to look like on all the different operating systems.

The breastfeeding woman looks like just like every other female emoji (and will come in different skin tones) but her shirt is down on one shoulder and there's a little baby head. You get the gist pretty quickly.

The final version might look different when the new ones are released this summer. Emojipedia wrote on its site, "These have been created in an Apple-like style by Emojipedia, as an indication of how they might be displayed when released by vendors." So there could be some tweaks or cuts before they reach the public. But there's every reason to believe that the breastfeeding emoji is sticking around and smartphone owners everywhere couldn't be more excited. (Naturally, the next step is getting an emoji with a woman bottle-feeding an infant, but this will do for now.)

In all, there are 69 new emoji and they include a bunch of very useful ones. Here are some early favorites.

It's about time, right?

Honestly, I just like the idea of employing this emoji as a way to break it to the kids that there are no french fries for dinner.

Who doesn't need this one, every single day?

Speaking of, I could use one right about now.

I can't even with this one.

And there are more where those came from, so start figuring out which ones are going to be in your faves as soon as you update. One notable emoji that's not going to be included? A redhead emoji. (Time to riot, redheads of the world.) Yes, an entire class of gingers are left out of the new update, which is kind of a weird move. People — redheads, obviously — have been begging the Unicode Consortium for an emoji that represents them as soon as they made the big move to allow you to choose skin and hair tone. Seriously, there's actually a Change.org petition for "ginger equality." As silly as that sounds, you have to admit that it's about time redheads had their own emoji.

Representation is important, even in our text messages, so cross your fingers and hope that redheads get their own emoji soon. For now, though, everyone should be thrilled that new moms (who, let's face it, deserve every good thing in the world — motherhood is hard!) are getting their own breastfeeding emoji. It's about time.