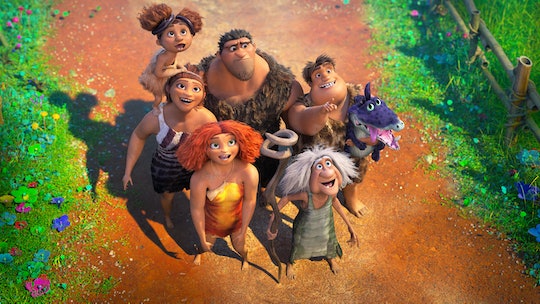 Mark Your Calendars: A Brand New 'Croods' Movie Is Set To Premiere On Thanksgiving

The Croods — you know, the family of fun-loving cave people — are back after a seven year hiatus. Yes, there's a brand new Croods movie coming out soon called The Croods: A New Age and it looks like it'll be a wild ride.

Set to premiere in theaters on Thanksgiving, The Croods: A New Age follows the prehistoric family as they set off on an journey to find a new place to live. But once the Croods, the world's first family, "discover an idyllic walled-in paradise that meets all their needs," they find that another family, the Bettermans, is already living there, according to DreamWorks' synopsis of the film.

Now who are these Bettermans? According to Universal Pictures, they're "couple of steps above the Croods on the evolutionary ladder" as they have an "elaborate tree house, amazing inventions and irrigated acres of fresh produce." "We thought cave people died off years ago," the Bettermans say in the trailer to the Croods.

Eventually, as you may have expected, "tensions escalate" between the Croods and the Bettermans. But when an outside threat challenges both families, they must join forces and embrace their differences to forge ahead.

The trailer for The Croods: A New Age dropped earlier this week and gives viewers a taste of the action and humor you can expect when the movie premieres this November.

This sequel from DreamWorks Animation comes seven years after 2013's The Croods hit the big screen. As for The Croods: A New Age, director Joel Crawford told The Au Review that it tells a story of "relatability."

"It's very much a father-daughter story, but what stood out to me was that it was all about these different characters," Crawford told the outlet. "It's rare to have all these different entry points that an audience can relate to, and I think that's the standout power of the movie, the relatability. So I really wanted to continue with this family, who, against all odds, is surviving in a crazy, dangerous, unstable world. And what makes them survive is not only their caveman strength, but this family bond that they have."

The Croods: A New Age heads to theaters on Nov. 25 and The Croods is currently available to stream on Netflix.