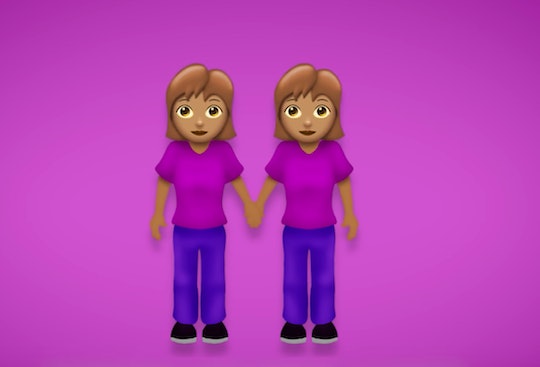 New Emojis Are Coming Soon & It's The Most Diverse, Inclusive Update Yet

When words don't fit, emojis say it all. There always seems to be an emoji for everything — whether you're expressing excitement, backing up an argument, or simply trying to convince a friend to get ice cream with you, emojis can certainly help. But, as it turns out, there isn't exactly an emoji for everything, because they're still making new emojis. And luckily, the new emoji update includes a service dog and a one piece bathing suit, helping text message lovers everywhere communicate more effectively and inclusively.

Emojis come in handy for so many situations. And in spite of there being so many on your phone, there are still quite a few emojis that are missing from the massive library. In spite of people being able to use a fairy, cartwheel, and surfer emoji, there are still so many things that people don't have — like an onion, or a bandaid, and a kneeling emoji.

But that is about to change in 2019, because there is a brand new emoji update coming to smart phones everywhere this year, according to USA Today. To be exact, 230 new emojis will be making their way to text messages within the next few months, and this is the most inclusive emoji update yet.

If that is not fantastic news, I don't know what else is.

The best part about these new emojis is how many people they include. This new update includes people with disabilities and also features an inclusive couple emoji, according to CNet. Now, people will be able to be represented by an person using sign language, a person in a motorized wheelchair or manual wheelchair, and a person using a probing cane. There are also new items to represent certain disabilities — like mechanical arms and legs, an ear with a hearing aid, along with two different dogs — a guide dog and a service dog.

Now, even more people will be able to feel represented by emojis and feel as if they can effectively communicate with their emojis. And that is absolutely awesome.

But there are some other super fun and special emojis that people can look forward to, as well. There is now a yawning emoji (for people to convey how bored they are), a sloth (on those days where people are feeling especially lazy), and a skunk (because things get a little smelly). For the chefs, there is now a garlic, waffle, onion, falafel, oyster, and butter emoji — incase people wanted to write their grocery list in emoji form.

The new objects included in the update are just as exciting. There is now a one-piece swimsuit emoji, briefs, shorts, and ballet shoes for the fashion forward emoji users. An adhesive bandage, drop of blood, and stethoscope for all of the nurses who love emojis. For all of the hobbyists there is now a yo-yo, kite, and banjo emoji just to name a few.

But, people shouldn't be running to their iphones just yet. The update won't be available until the fall, according to Inc., when operating systems finally release a major update. So, people will have plenty of time to plan out their text messages with these brand new emojis. But the wait will definitely be worth it.