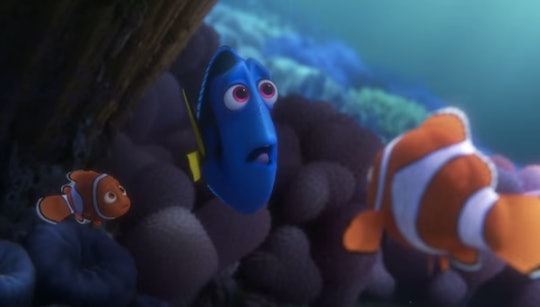 The New 'Finding Dory' Trailer Is Here To Warm Your Heart

It has been so long since Finding Nemo it's possible you've forgotten just how adorable it was. But the new Finding Dory trailer is here to warm your heart again and if it doesn't make you the happiest movie-goer around, you should check your priorities. Okay — if you aren't into tales of homesick little fish finding their way back home and meeting new friends, I guess that's fine. To each their own. But this trailer is just about everything you want a Disney-Pixar movie to be. (Also, anytime Peter Gabriel's "Solsbury Hill" kicks in mid-promo for a homecoming tale, I'm sold.)

Finding Dory, which comes out in wide release on June 17, is bound to be a guilty pleasure for kids and grownups alike. The movie focuses on Dory, a blue tang fish voiced by Ellen Degeneres, who's reminded that she actually misses her family and wants to go back to her roots. Hilarity ensues, of course. (Dory's parents are voiced by Eugene Levy and Diane Keaton, so that's not surprising.) But there are also new characters this time around. Ed O’Neill will voice Hank, an octopus with seven legs and It’s Always Sunny in Philadelphia’s Kaitlin Olson will voice Destiny, a whale shark who thinks she’s a whale. Adorable, right?

Already, my favorite part is when Dory runs into Olson's whale shark character — Destiny tells the little blue tang that she has fond memories of swimming with Dory as kids. "It was so much fun because I’d tell you a story and then you’d completely forget about it and then I’d get to tell it to you over and over again," she jokes. (D'awwww...)

That's the sort of skill my S.O. probably wishes I had, every time he breaks into tales of his good old days, too. Alas, we can't all be as sweet as Dory. But it's a good example, yet again, of Disney-Pixar nailing the caliber of humor needed to help adults watch the same films over and over with tiny companions who just won't be able to get enough of this new Finding Nemo-off crew. Because let's be real — you know as soon as this is released in June, you're going to be stuck under the sea until school starts up again. Sorry, parents and caretakers everywhere.

Finding Nemo was released in 2003 (does that make you feel old or what?) and grossed $339 million at the box office, making it the highest performing original animated movie in history — until Frozen came along in 2014 and broke that record by grossing $347 million at the box office its opening weekend. But Finding Dory looks like it could be another huge hit. You might want to start pre-ordering those Dory toys for the holiday season as soon as possible, because a new generation is about to have their minds blown.