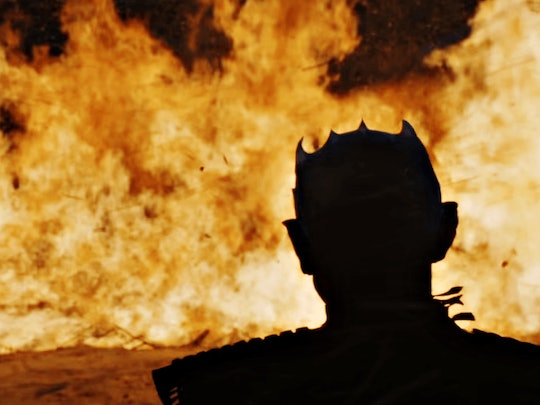 The New 'Game of Thrones' Season 6 Trailer Is Full Of Fire, & Vengeance

On Monday, HBO released a new trailer for Game of Thrones Season 6, set to premiere on the cable network on April 24. As the season five finale left fans with quite the cliffhanger and a lot of unanswered questions — Is Jon Snow dead? What happened to Sansa Stark? What's going to happen to Daenerys Targaryan now that she's been captured? — this latest, longer second trailer for the upcoming season of Game of Thrones throws even more questions at fans all choreographed to an epic beat of battle drums, trumpets, and guttural war cries. Seriously, this is one bad*ss trailer.

HBO screened the first episode of the new season of Game of Thrones, titled "The Red Woman," at a world premiere on Sunday night at the Chinese Theater in Hollywood, California. Viewers, fans, and show stars in attendance were blown away by the opening episode in a season that will be the first to diverge from A Song of Ice and Fire series's author George R.R. Martin's books. The second trailer for Game of Thrones Season 6 hasn't put to rest just all of the questions we had from the end of Season 5, but it's certainly gotten fans excited for what's to come next season with plenty of weighty epic quotes, tons of blood and sword clashing — and even more dragon fire.

Here's a closer look at all of the insane moments from the new Game of Thrones Season 6 trailer:

"What was taken from me."

And rightfully so. As fans learned from the first Season 6 trailer, Sansa Stark's jump off a castle ledge with Theon Greyjoy does not appear to have ended in her death. In the new trailer, actress Sophie Turner says forebodingly over shots of Ramsey Bolton (her abusive husband) and Walter Frey (the man who brutally murdered her brother, mother, and much of their family): "It's all I think about — what was taken from me."

"The dead are coming."

Oh, hello there, King of the White Walkers, also known as the Night's King. These guys will never not be terrifying. Just before the Night's King appears, Liam Cunningham as Ser Davos says with much gravity: "The real war is between the living and the dead. And make no mistake: The dead are coming."

I've got a feeling that a whole bunch of Dothraki are about to be vaporized into ashes just a few frames after this overhead shot of one of Daenerys's dragons looming above.

Arya Gets A Second Chance

Arya Stark was blinded after disobeying the Many Faced God at the end of Season 5. It would appear that her blindness might only be temporary, but it looks like she'll have to prove herself first — as actor Thomas Wlaschiha as Jaqen H'ghar tells Arya: "The girl has been given a second chance. There will not be a third."

"What we do to our enemies."

Oh man... Cersei Lannister is pissed. And, I think rightfully so, what with the whole imprisoned against her will by the High Sparrow and then paraded naked through King's Landing to be pummeled with insults and literal sh*t by her subjects. It doesn't help that her brother/lover Jaime has returned from Dorne with their dead daughter. The amazing Lena Headey as Cersei can be heard seething (presumably to Jaime): "Stand at the head of our army, where you belong. Show them what Lannisters are — what we do to our enemies."

Westeros's favorite dwarf is back to drinking — and making astute little quips for which fans adore actor Peter Dinklage. In a brief appearance in the Season 6 trailer, Tyrion states that "Dragons do not do well in captivity." When Missandei questions how he knows this, Tyrion casually responds with "I drink... and I know things" as he takes a swig of wine. Oh Tyrion, I've missed you so much.

It's the question to which everyone wants the answer: Is Jon Snow dead? The Season 6 Game of Thrones trailer shows only two very brief glimpses of actor Kit Harrington as the bastard Stark son. The first looks as though it's well after he's dead — but the second shows Harrington with his eyes open while laying on his side. Perhaps there's hope yet that Melisandre — aka, the Red Woman — resurrects the real Lord of Light (known in the books as Azor Ahai) since she seems like such a random-yet-plot-advancing presence at the Wall?

Watch the full trailer for yourself below and just try not to pee your pants with excitement. The Game of Thrones Season 6 premiere get here soon enough. Game of Thrones premieres on April 24 at 9 p.m. Eastern on HBO.