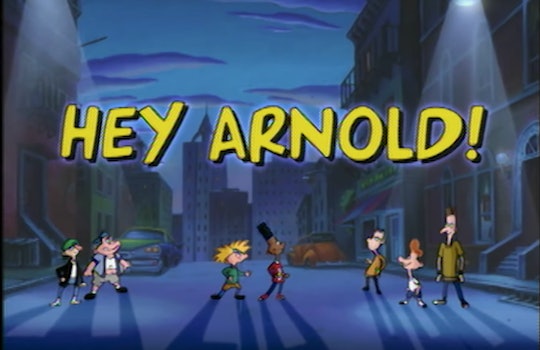 Get Nostalgic With This New ‘Hey Arnold’ Movie Trailer

Nickelodeon cartoon fans who have been mourning the absence of a certain football head are in for a big treat. The new Hey Arnold movie trailer has hit the internet. And yes, it will make you feel like a kid again.

The upcoming Hey Arnold: The Jungle Movie, which will premiere Nov. 23, is sure to be a heartfelt nostalgia trip for children of the '90s, while introducing a whole new generation of kids to the beloved cartoon. BuzzFeed debuted a sneak preview of the two-hour TV movie on Monday. The video is narrated by series creator Craig Bartlett, who calls it "the movie [he] always wanted to make."

According to the first look video, viewers will catch up with Arnold and his friends (and enemies...) one year after the end of the television series, even though nearly 15 years have passed in real-time. Arnold will be finishing up fifth grade and heading toward sixth, but not before going on a Central American field trip with all of his classmates to a fictional country called San Lorenzo. Hey Arnold devotees will remember that the series ended on a cliffhanger, with Arnold, who lived with his grandparents, finding a map in his dad's old journal that seemed like it could help him solve the mystery of what happened to his parents. That map will apparently play a big role in the movie.

The first look video doesn't just tease the plot of the TV movie. It also shows fans how their favorite characters have changed over the intervening year in cartoon time. Mostly, it seems, they've gotten cool new sneakers. In addition, Arnold's best friend Gerald has gotten a new hoodie, while his tormentor (and secret admirer) Helga has a few sixth-grade-worthy updates to her classic jumper. "Ultra-nerd" Phoebe has gone through the biggest change of all, looking more "put-together," as Bartlett says in the video.

According to a report in Variety, the kid characters in Hey Arnold: The Jungle Movie will also be voiced by new actors although many of the adult voice actors will remain the same, and the original actors who voiced Arnold and Gerald are still slated to appear in the movie, just voicing different roles.

While Arnold and his crew may have some new outfits, and may sound a little different, they're still undeniably the hilarious, heartwarming characters that '90s kids fell in love with during the show's heyday.

I can't wait for November. And hey, now that Hey Arnold is coming back, can we get a Rugrats reunion, too?