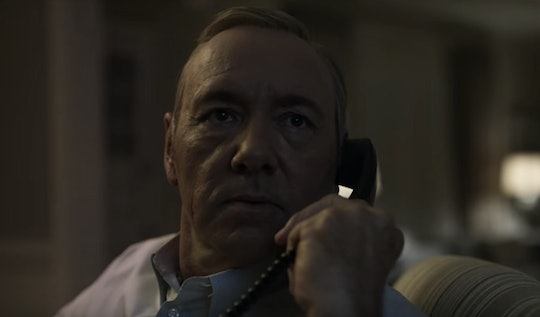 The twisted, sometimes-hilarious, sometimes-terrifying Netflix original series, House of Cards is returning for its fourth season. The cliffhanger ending of season three has had fans waiting to see what becomes of Frank Underwood and his precarious position of power. Well, the new House of Cards trailer is out and it is intense. Seriously intense. Maybe you should sit down.

There's not too much plot-wise that one can glean from the trailer because it is a rapid-fire montage of murder, sex, murder, and revenge. But perhaps that is enough to show that Frank and Claire Underwood are up to their same old tricks. Careful fans will notice, though, that the trailer has some clues about this next installment of the Washington, D.C., saga that has fans never wanting to go into government work ever. Though Claire said at the end of season three that things were over between them, it seems that they are not quite over. She plays a prominent role in the trailer, and, presumably, this next season. Their marriage has never been without turbulence, but it is hard to imagine a more well-suited couple than the ever-plotting Claire and the sneakiest fellow in the capital (and that's saying a lot). Whether she left him, as she said she would, or not remains to be seen. If she did, revenge may be on Frank's mind. If she didn't, well, perhaps they've kissed and made up (yeah, right).

Frank Underwood's most (mostly) loyal aid, Doug Stamper, makes an appearance in the trailer as well. Stamper is known for his dark past, his mysterious present, and his cold-blooded devotion to his job as Underwood's executive assistant and sometimes-hitman. In the teaser, he appears to be putting in some hours as the latter. As if things couldn't get more disturbing on the show, it looks like he is trying to kill someone by suffocating them with a glass. But who? It's hard to say.

The trailer also makes reference to Frank Underwood’s presidential bid. Heather Dunbar, his opponent, shows up in the reel, signaling to fans that she and Underwood are probably still duking it out in the Democratic primaries (timely, no?). The shadowy shot of her peeking through the blinds and someone leafing through a printout of names (perhaps voters’ names?) suggest a rigged election, or some sort of foul play (but that’s always an easy guess with this crew).

Other returning characters include the unpredictable, inestimable Jackie Sharp (in a state of undress, no less), several disgruntled and suspicious reporters, and a Civil War re-enactor. Over the eerie violins and ear-pounding drums that make up the soundtrack of this trailer, Frank is making a speech, perhaps to Claire, about how hard he’s worked to get to where he is today. It’s a sincere speech, and it would even be sympathetic were it not for the Machiavellian lengths to which Frank has gone in the past three seasons of the show. From this teaser, it looks like he’s not done yet. He might even just be getting started.