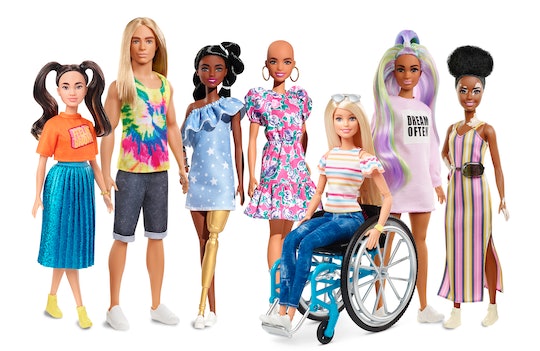 Growing up, Barbie was either white or black with straight hair, long limbs, a tiny waist, wide hips and large breasts. Those were the only options, and they weren't very feminist or inclusive. But my, how the times have changed. Barbie now comes in a huge range of shapes and sizes, and the new inclusive Barbie line for 2020 continues to expand the brand so that even more kids feel represented by their dolls.

This year, Mattel is adding a doll with a prosthetic leg, a Ken doll with long, rooted hair (so many man bun opportunities, or perhaps a nonbinary Ken), a doll with vitiligo, two new size and style-inclusive fashion dolls, a doll in a wheelchair, and a Barbie who is completely without hair, according to a press release. The Barbie Fashionistas 2020 line is definitely the most inclusive yet.

Being someone who grew up looking like every doll on the market (read: white, tall, slender), I will admit, this was a blind spot of mine for many years. I lived in a very predominantly white area of the middle class suburbs and exurbs, where the only real exposure I had to people of color was on TGIF on ABC. It wasn't until college, when I would regularly interact with others who were different, that I understood (at least as much as any privileged white kid can) that representation is crucial, that it matters. Obviously, moving to New York City, and marrying into a Chinese and Puerto Rican family has only made my awareness that much more acute.

In the past several years, it's as though Barbie has had the same revelation. (Undoubtedly due to influence from amazing groups like The Representation Project, girls like Jordan Reeves, and countless black and brown women like Adebe DeRango-Adem who wrote so passionately about the subject.) They are consistently moving the bar higher, becoming more inclusive and more representative of the children who play with these dolls.

Because of this sea change, my daughter has grown up with Barbie. I never felt like it was something I shouldn't let her play with. She has a legion of Barbies in all shapes, sizes, colors, and gender orientations. I know that this latest iteration for 2020 will be an instant favorite. Because, the thing is, she doesn't expect any less from Barbie. She knows that Barbie isn't just blonde and big breasted. They're Asian like her, or they're brown or black, or maybe they're disabled. She thinks that Barbie is what it has always been for her... people. And really, isn't that the best sort of confirmation for any toy manufacturer? When kids feel seen, they have the confidence to take on the world.