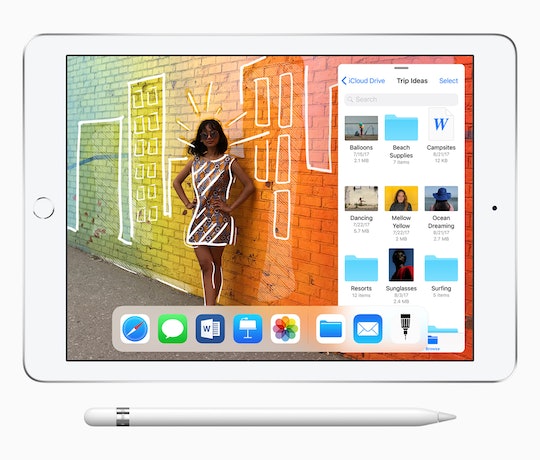 The New (Cheaper) iPad Is Here, & It Will Completely Change How We Educate Our Kids

Rumors that Apple could be revealing a new iPad have been swirling ever since the company announced it was holding a press event on March 27 in Chicago. And guys, the big day has arrived! On Tuesday morning, Apple unveiled the newest version of its iPad — and as previously thought, it is focused on the education market. So what's the deal with the new, cheaper, iPad? It could change the game for educators.

During the press event, Apple revealed the new iPad will cost $329 for consumers and $299 for schools. Even more exciting? It's available starting today, and with shipping this week. As the MacRumorsLive Twitter account revealed in real-time, the new iPad is a 9.7-inch device that features "a high resolution touch system with low latency and same support for Apple Pencil as iPad Pro." And as The Verge reported, this new iPad weighs about 1 pound and has 10 hours of battery life.

“Learning today happens everywhere, even where there might not be a desk, said Greg Joswiak, vice president of product marketing for Apple, during Tuesday's presentation. "Kids love iPad because it’s so versatile." In a news release, Joswiak added:

iPad is our vision for the future of computing and hundreds of millions of people around the world use it every day at work, in school and for play. This new 9.7-inch iPad takes everything people love about our most popular iPad and makes it even better for inspiring creativity and learning. Our most popular and affordable iPad now includes support for Apple Pencil, bringing the advanced capabilities of one of our most creative tools to even more users. This iPad also has the power of the A10 Fusion chip, combined with the big, beautiful Retina display, advanced cameras and sensors that enable incredible AR experiences simply not possible on other devices.

The event went into detail about all of the cool things teachers and students can do, like: Make a book for a group project and collaborate with others on it, and dissect a virtual frog, just to name a couple. (Too cool!)

Apple also spent time talking about the various updates to current teacher tools, such as Classroom, ASM, and Schoolwork. (I'm not a teacher, but this tweet helps break down the differences in how educators use them.)

It seems like there would be an initial learning curve if more schools were to bring this cool technology into classrooms. But I'm sitting here foaming at the mouth, and I'm not even a teacher or a student right now. Who knows? Maybe my children will be doing group projects, lab reports, and pretty much any time of schoolwork/report on iPads in the near future.