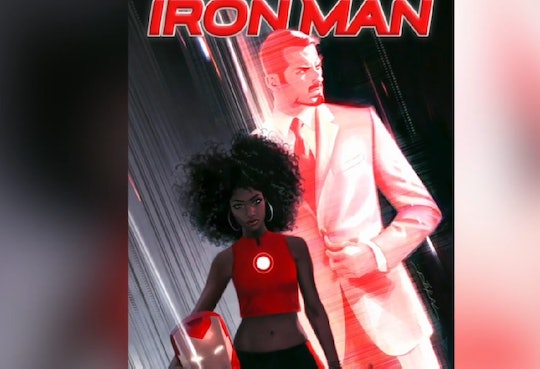 The New Iron Man Is A 15-Year-Old Black Girl, & That's Some Awesome Progress

Move over Tony Stark, there is a new girl in town. And it's not some new sidekick or villain to help or fight Iron Man — it's actually Iron Man. On Wednesday, Marvel revealed the name and image of Tony Stark's replacement and fans could not be more excited. Why, exactly are the excited? Because the new Iron Man is a 15-year-old black girl which is awesome.

Hold the phone — what is happening to Tony Stark, the billionaire genius who originated Iron Man? According to Time, at the end of the comic book series, Civil War II, Stark will abandon the Iron Man suit and pass it over to someone else. That person is 15-year-old Riri Williams who seems to be just as much of a bad ass as Tony Stark is. According to Time, Riri attends MIT and builds her own Iron Man suit in her dorm. It is then where she learns of Tony Stark and I'm assuming, the story begins to be told. That sounds so, so awesome.

According to the book's artist, Stefano Caselli, Riri will use injustice in the world as a tool to help her rise up and assume the position of Iron Man.

As we've slowly and hopefully very organically been adding all these new characters to the Marvel Universe, it just seemed that sort of violence inspiring a young hero to rise up and act, and using her science acumen, her natural born abilities that are still raw but so ahead of where even Tony Stark was at that age, was very exciting to me.

To have a young female black woman take over the position of Iron Man — not to mention play the lead role in the comic book series — is just incredible. And luckily, people on Twitter seem to be taking the news pretty well — not that they wouldn't, even making some pretty terrific jokes about the backlash that Marvel might receive.

While the reaction towards the new character has been incredibly positive, there has been one incredibly valid critique made about the new series involving Riri Williams. The problem? There are zero black women on the team behind Williams.