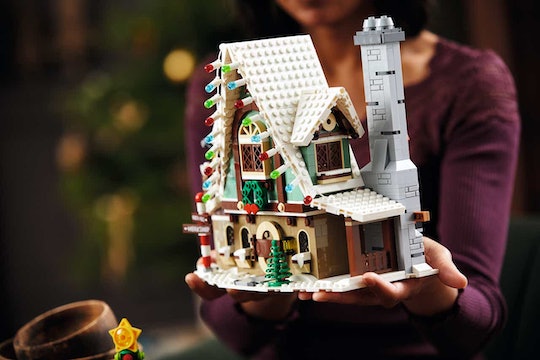 Why did no one tell me that LEGO made a holiday village? Because I'm just now hearing about it, and I already can't get enough. The new LEGO Elf Clubhouse is giving me all the feels, and I know I'm going to want every kit in that village.

As the latest installment of a holiday village made from your favorite plastic bricks, LEGO Elf Clubhouse is over a thousand pieces and retails for $100. The kit is stunningly designed, and includes one of LEGO's signature light bricks to help illuminate the scene. But those are just the basics — let's break this bad boy down and see what makes it so special.

First, the detail is Buddy-the-Elf-on-a-coffee-and-maple-syrup-bender bananas. LEGO has thought of everything. There's even a waffle machine in that clubhouse for those elves who apparently need a sugar fix at all times of the day. It has a re-positionable chimney (in case any of the higher ups drop by, and you need to hide some stuff, if you know what I mean) and a sleighport to hold their transportation.

I'm telling you, the only thing the new LEGO Elf Clubhouse doesn't have is a bar, and I think you can imagine that's in the basement. It's a family-friendly toy after all. However, they do have a gingerbread house and a winter village fire station available, so perhaps we can just build ourselves one. They are customizable, after all.

Being the LEGO fanatic that I am, I'm always interested in how these designs come to be. What is the creative process? The press release noted that LEGO fan turned official LEGO designer, Chris McVeigh, said, "For the LEGO Elf Clubhouse, I wanted to explore the world of Santa’s Elves and work out what they do after they’ve had a long day making toys, giving a glimpse into their secret world, whilst also creating an iconic holiday set that reflects the architecture of alpine chalets." He also said that his favorite piece in the set is the reindeer that he likes to call Brixen. Brixen!

It's fascinating, and admittedly, Brixen is clever, but let's be real, he was 100% (probably) considering the level of rum in their eggnog. And because I'm likely going to be assembling this with two children, the amount of rum in my eggnog will be higher than anything the elves need.