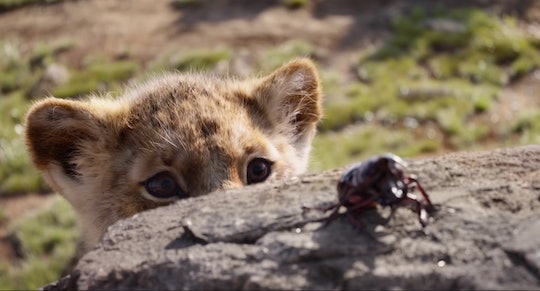 Dismantle the couch fort (sorry kids) and break out the popcorn, the new live-action Lion King is now on Disney+. After months of waiting, the adventures of Simba, Timon, and Pumbaa are finally available to stream on-demand.

Initially, many people expected to find the latest Lion King nestled amongst its animated older brother in the Disney+ content library when the streaming service first launched in November. Unfortunately, the live-action version was nowhere to be found, frustrating subscribers. But now, more than six months after it premiered in theaters across the country, the live-action remake of Lion King landed on Disney+ Tuesday.

For those who've still yet to see it, the live-action Lion King features a star-studded cast that includes Donald Glover, Beyonce Knowles, James Earl Jones, Billy Eichner, Seth Rogen, and John Oliver to name only a few. It follows the same basic story laid out in Disney's original animated classic. A young lion prince named Simba flees his kingdom after his father is murdered by his uncle. But although new friends teach Simba that years in hiding can infuse a little Hakuna Matata into your life, the young cub soon learns you can't run from your fears forever. With the help of old and new friends, Simba learns the true meaning of responsibility and leadership.

When released to theaters in July 2019, the film enjoyed overwhelming success, pulling in $191 million in its opening weekend alone, according to Box Office Mojo. Overall, the live-action Lion King drew in more than $1.6 billion worldwide. More recently, the film was nominated for two Golden Globes, including Best Original Song and Best Animated Features.

Other hotly-anticipated films set to hit Disney+ sooner rather than later include Toy Story 4, the latest installment in Disney's heart-warming animated buddy comedy. Toy Story 4 is expected to hit the streaming service on Feb. 5.