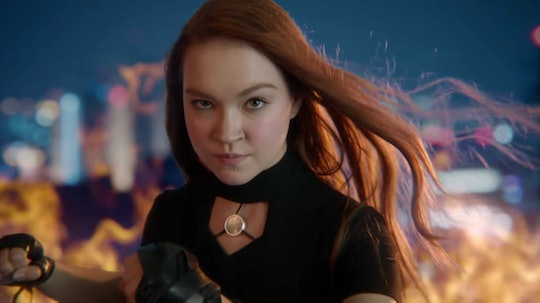 She's your basic average girl, and she's here to save the world, you can't stop her 'cause she's... a live action movie! That's right — nearly 17 years after the Disney Channel animated series Kim Possible premiered, Disney is reintroducing the next generation of kids to the badass character. The trailer for the new live action Kim Possible movie is finally here, and it looks like Kim is still getting up to awesome crime-fighting adventures.

"So a few years ago, I accidentally received a distress call," Kim narrates the opening moments of the trailer, along with footage of her fighting evil and flying on a jet pack. "I was done with my homework, so I answered it. Now, well, I save the world. Who am I? I'm Kim Possible." And for those tuning in for nostalgic purposes, you'll be happy to know that the original four-beep theme music plays at multiple points throughout the trailer.

Like in the original animated series, Kim has to balance villain-defeating with being a high school student in Middleton, USA. Her bestie and sidekick Ron Stoppable (played by Sean Giambrone) and their friend and Communication Guru, Wade, (played by Issac Ryan Brown) are both still around to help with that. (Hopefully Wade's Kimmunicator is, too.)

Additionally, the movie will feature special cameos from two actors who provided their voices to the original series. Patton Oswalt will reprise his role as Professor Dementor, and Christy Carlson Romano, the original voice of Kim Possible, will make a cameo as an undisclosed character.

Furthermore, Kim and Ron will have a new member of their crime-fighting crew in the film. Ciara Wilson plays Athena, a classmate at Middleton High School and a huge fan of Kim who winds up joining Team Possible. However, it seems like Kim needs more help getting around school than actually fighting evil. As Disney's press release explains, Kim's confidence as a student "is shaken when she faces roadblocks at every turn — getting lost in the confusing hallways, being late to class and facing rejection during soccer tryouts from her frenemy, Bonnie." But for Kim, anything is possible (sorry), and I have a feeling she'll make it out on the other side.

And for those wondering, yes, Ron's naked mole-rat Rufus will be in the live-action film. He did not make it into the trailer, I assume because he looks much creepier as a live-action character than as an animated one. Here's hoping Ron's iconic song "Naked Mole Rap" makes it into the movie, too.