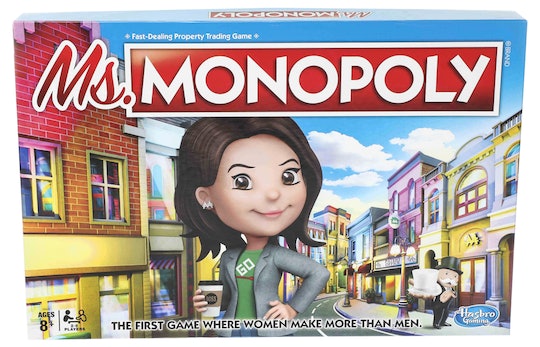 Ms. Monopoly Is A Girl-Powered, Feminist Spin On The Classic Real Estate Game

Did you pass GO? Collect $200! Monopoly has been entertaining players and inspiring future real estate brokers since it was first released in 1935. While there have been different versions of the game released over the years, in mid-September, Hasbro will launch the most exciting one yet — Ms. Monopoly. The first Monopoly game to celebrate women trailblazers will also have a new mascot gracing its cover. While Mr. Monopoly is a real-estate maven, Ms. Monopoly is an advocate whose mission is to invest in female entrepreneurs. Umm... could this be more awesome?

Breathing new life into a classic franchise, in lieu of buying properties, Ms. Monopoly invites players to invest in groundbreaking inventions and innovations made possible by women throughout history. From inventions like WiFi to chocolate chip cookies or solar heating to ladies modern shape wear (best invention ever, IMHO), Ms. Monopoly celebrates everything from scientific advancements to everyday accessories — all created by women. What's more, in the world of Ms. Monopoly, women make more money than men. Sure, men have the ability to make money too if they play their cards right (literally), but in this re-imagining of the world's economy, women have the advantage from the get go. Could I reverse Jumanji this situation and jump right in to the game, please?

As a feminist, women's college graduate, and mother of two young daughters, I'm pretty psyched about this news from Hasbro (and if I had a son, I'd likely be even more excited). It's so important for our children to see equal representation in all of our leaders, from business and entertainment to politics and education. Ultimately, though, educating our children on equal rights for everyone and gender equality begins at home. It starts in the way that parents treat each other, in the entertainment viewed at home, in what we read and now, in the games we play. And while the gender pay gap still favors men, I can only hope that will change in my children's lifetime. While we're dreaming, I wouldn't be opposed to a female President of the United States, either.

It's no surprise Ms. Monopoly was conceived by Hasbro, a company whose workplace culture values and empowers women, from providing best-in-class benefits to ensuring competitive and equitable pay. Not only do women make up more than half of the company's employees, but Hasbro is committed to growing women in director and above roles globally across all business areas to 50 percent by 2025, according to the game's press release. Hasbro continues to evaluate new ways to support the growth and development of all employees, including women, making this a #GOALS company if you're looking for a new job, ladies.

And how cool is this? In celebrating the release of Ms. Monopoly, Hasbro surprised a group of young female inventors and entrepreneurs with the recognition they deserve: an investment of $20,580 to fuel their inventive spirit and further their projects (that dollar amount just so happens to be the same amount of Monopoly money featured in the game). To see the reactions of the junior female inventors after playing Ms. Monopoly, click here (be forewarned, you may sniffle). What a moment for this group; I can't wait to see what incredible inventions and business dreams they are able to realize in the future.

Ms. Monopoly starts hitting shelves in the U.S. and in select countries globally in mid-September (suggested retail price $19.99). What an awesome way to inspire our young dreamers by playing a game based on women trailblazers who have already carved a path to success. They had to work extra hard, but as a result, they achieved their dreams; and so can your little entrepreneur.

Be a game changer.