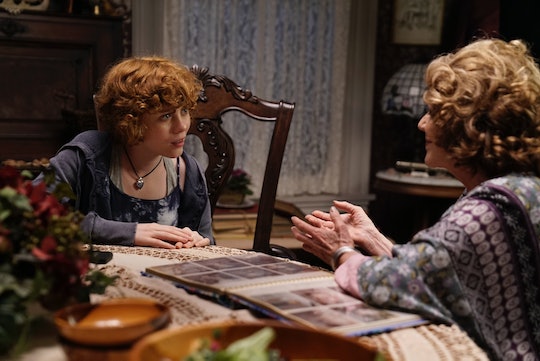 When you think of Nancy Drew, what do you see? For me, it’s the old school paperback books with the image of a young girl in a dress holding either a magnifying glass or a flashlight. I’m not one to say that a woman isn’t capable of solving crimes in a skirt and heels, but it’s never really been a realistic image. That’s why I absolutely adored watching Nancy Drew and the Hidden Staircase, because it really brought the amateur investigator to life in a way I have never seen before.

Sophia Lillis, the 17-year-old actress behind the latest iteration of Nancy Drew, couldn’t have agreed more. “I mean, if she was wearing a dress and solving crime, kinda like those pep skirts kind of thing, but it's also in the modern time, it's not gonna make much sense,” Lillis told me during a recent visit to the Romper office in New York City. The young actress was excitedly animated as she talked about her new role, clearly aware of the importance of keeping it real. Lillis continue, “And if that happened, then the kids who are watching it, though they may enjoy it, they still can't really see themselves in Nancy Drew, they can't think like, oh I can be like her if she's someone they [feel they] can't be represented by.”

Not wearing a skirt to solve local mysteries is just the tip of the iceberg when it comes to the latest version of Nancy Drew. In the film, which was released in theaters on March 15, Nancy doesn’t seem to follow any of the so-called “gender norms” we so often see teenage girls forced to follow on the big screen. This Nancy, for lack of a better word, is a tomboy of sorts. She has short curly hair, she’s almost always in a t-shirt and jeans, and instead of driving around town she prefers to skateboard. She's also not wearing a lot of makeup or chasing cute boys around the neighborhood for fun. Nancy looks and sounds like an average American teenage girl, which is exactly what they need to see on display in film and television.

She is herself. She doesn’t apologize for being herself, she just doesn’t.

“In the books she kinda acts more mature in a way, she may be a little older, but she’s not that old,” Lillis explains when I point out how much more authentic her portrayal of Nancy Drew is. “[Not enough] to go off on her own, stay overnight at a hotel. Not talking to — that actually happened in one of the books, without talking to her dad.”

Back in the 1930s through the 1960s when Nancy Drew books were first being published, this kind of escapism was welcomed with open arms. But now, in 2019, society is much more aware of itself. When a young girl disappears overnight without consulting her parents, there’s cause for concern — and then real police and investigators need to get involved. Lillis fully recognized this going into the role, and she seems beyond grateful to be the kind of Nancy Drew that knows better. Throughout the film Nancy keeps in constant communication with her widowed father, which parents will appreciate while watching the film with their children.

While Nancy Drew may not have been a present cultural icon for Lillis while she was growing up, she makes it clear that taking on the latest portrayal was important to her. The one thing she wants young viewers to take away from Nancy Drew and the Hidden Staircase? “She is herself. She doesn’t apologize for being herself, she just doesn’t,” Lillis explained. “She’s herself and she just does whatever she likes, and she’s not apologetic for it because she doesn’t think she has to apologize for being herself. She doesn’t have to hide herself.” And neither should you.

Nancy Drew and the Hidden Staircase is in theaters now.