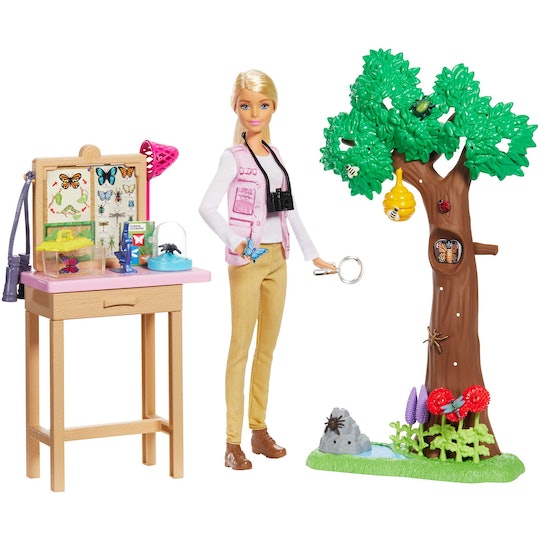 The National Geographic Barbies Are Perfect For Your Budding Scientists & Explorers

I live in a house completely chock-a-block with Barbies. My 8-year-old daughter loves the classic toy with a level that is probably bordering on obsessive. We have every race, every size, and just about every occupation that Barbie offers, and wild horses couldn't drag my daughter from a new release. That's why I'm particularly excited about the new National Geographic Barbie, which features the iconic character as an entomologist, examining insects like a boss.

Barbie has been at the forefront of STEM representation in dolls. My daughter has a scientist Barbie, a veterinarian Barbie, and even a Katherine Johnson Barbie. The new National Geographic Barbie expands upon this theme by giving some love to bugs. The doll and accompanying play set range from $15 to $30, and is available nationwide from retailers like Walmart.

Traditionally a "girls" toy, it is awesome that Barbie is rocking the bug love, because girls are often told that bugs are a "boy" thing, that they should be afraid of them, and that they're gross. This is in spite of the fact that women have always been involved in entomology, dating back to at least Maria Sibylla Merian in the 17th century — a famous entomologist, artist, naturalist, and proto-ecologist.

Mattel, the makers of Barbie, said in a press release that "Barbie allows girls to try on new roles through storytelling by showing them they can be anything and, through our partnership with National Geographic, girls can now imagine themselves as an Astrophysicist, Polar Marine Biologist, and more."

As someone who grew up loving science but who was told that it wasn't for me, that it was something "girls don't do," I love the dedication Mattel has to upending this idea. I was cautioned away from my love of big snakes and lizards, and told that my interest in diseases and illnesses were based in anxiety instead of genuine curiosity. This new National Geographic Barbie will allow those little children who love bugs to see themselves in the future in a career that means something to them, or at least the possibility of a future in that career. Bugs aren't gross, they're necessary, and this cool set from Mattel and National Geographic represents that in the best way.

In the set, Barbie is depicted as a field entomologist, complete with sturdy khaki pants, boots, and a cargo vest ready with all of her equipment. A camera hangs around her neck, poised to photograph specimens in the wild. Her set includes a tree full of insects and flowers, and a field lab table with binoculars, a microscope, and plenty of groovy bugs.

I cannot wait for my daughter to see this cool set. She's going to be over the moon. It will go perfectly with the camper van all Barbie and Stacy commune thing she has going in a corner of our living room. Also, I am selfishly hoping that the addition of the entomologist Barbie will mean that she takes an interest in bugs so that she will bait her own hook when we go fishing at the Delaware river. It might be a long shot, but I'm nothing if not hopeful.