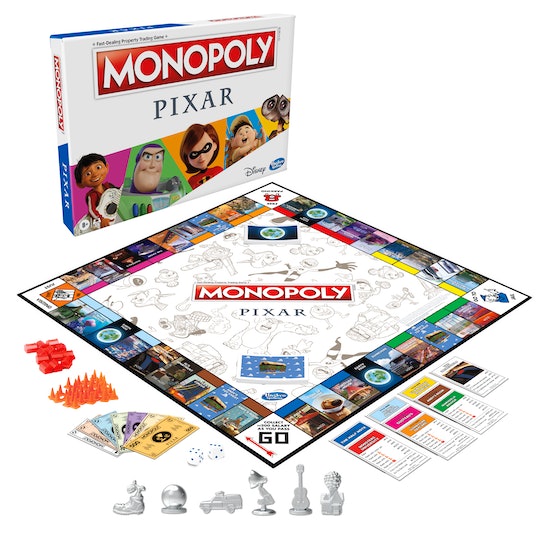 I am a board game fanatic. It's easily one of my favorite ways to spend an evening, and growing up, Monopoly was a perennial favorite. Nowadays, Monopoly seems to get cooler by the month with their ever-expanding line of games, and the new Pixar Monopoly is a real favorite. It combines the wonder of the animation studios with the fun of the classic buy-and-sell game, and my family needs it.

The set is absolutely stunning, and fans of Coco and Finding Nemo, along with other Pixar favorites, will simply adore the new Pixar Monopoly, available exclusively at Amazon for $24.99. The game itself features locations from the movies and coins from Pizza Planet to fully immerse the players in the game. But perhaps the best part of the whole game are the playing pieces. There is Hector's guitar from Coco, the boot from Wall-E, Carl's house from Up, the Pizza Planet truck from Toy Story, the iconic Pixar Ball, and Lamp — yes, the Pixar lamp. However, if you look closely at the picture, you'll see that instead of having a jail space, you have the dog from Up, wearing the "Cone of Shame." If you land on that particular space, you have to pay $100. And deal with the fact that you can no longer bite at your stitches.

Personally, I can see myself playing the new Pixar Monopoly with my kids with one of our favorite Pixar films in the background. Right now we're on a Coco kick thanks to the beautiful music and touching storyline. But really, with two kids, that can change at the drop of a hat. My son went for months only watching The Incredibles, and insisting he was as fast as Dash. This went about as well as you'd think for a 3-year-old running around the house at top speed.

This game, though? Its value lays in the time spent playing with each other, and that's pretty amazing.