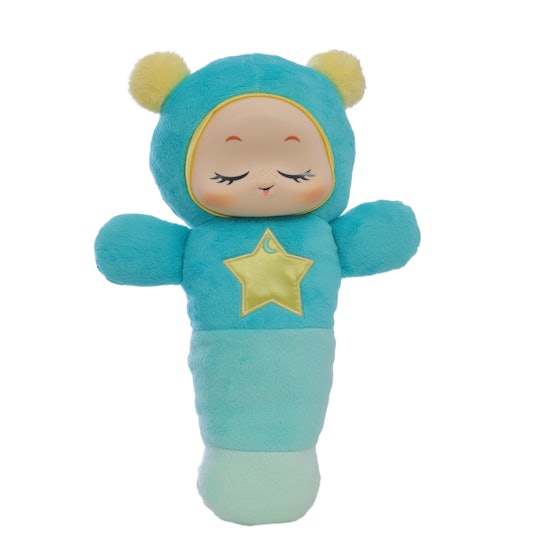 For as long as I can remember, every child in my family receives a Glo Worm toy not long after they're born. They're the perfect comforting sleep companion for little ones, and everyone loves them. But while the new Playskool Glo Worm with SmartSense is just as inviting and sweet, it's totally leveled up.

The original Glo Worm was wonderful with its subtle light and soothing sounds, but the new Playskool Glo Worm features SmartSense technology that can sense when a baby is crying, and responds by turning on the music and illuminating the Glo Worm — no more having to creep in your baby's room in the middle of the night to reactivate it when they stir. (Or having to teach a toddler how to press the Glo Worm belly over and over again.) The new Playskool Glo Worm will be available September 1, and you can preorder right now through Amazon for $25.

The cry detection is not the only surprise in store for this tech-filled Glo Worm. You can also record your own voice into the toy so that what plays when they cry is you talking to your baby, soothing them in a way that only a parent's voice can. (You can also record some white noise on there if you want, or a favorite lullaby — basically anything soothing to your child.) It's also machine-washable (no Velveteen Rabbit situations here), and works with just two AA batteries.

Honestly, though, the Glo Worm with or without the super baby sensing powers is already one of my favorite toys to get a baby. Adding in this "mama's voice, no stealth activation required" aspect to it has made it not only indispensable, but also just really dang cool. I can't tell you how many times I snuck into my son's bedroom as he started to fuss, just to squeeze his little blue Glo Worm and have it sing him gently back to sleep. He used to tuck his chubby little toddler arm around its soft belly and sigh into the the sound and warm glow. The new Playskool Glo Worm with SmartSense sounds like it will make the whole thing that much easier and that much more comforting.