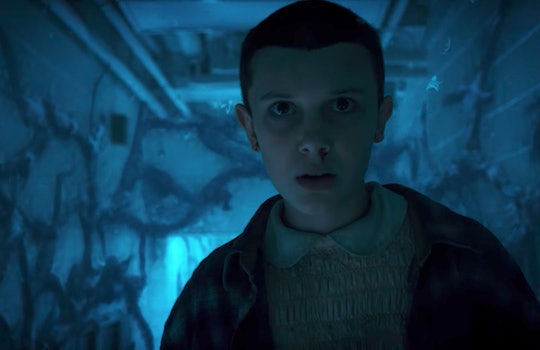 You Need To See The New 'Stranger Things' Trailer

If waiting for more episodes of the Netflix hit Stranger Things after its debut season last summer left you feeling like you're stuck in the Upside Down, you're in luck: The new Stranger Things Season 2 trailer is here, and it's even creepier and more intense than you remember the sci-fi thriller being. Ominously scored to Michael Jackson's "Thriller," the preview of Season 2 illustrates at every turn that the crew of kids and adults in 1980s Hawkins, Indiana has absolutely not escaped the monster that terrorized the town. Yes, Will Byers managed to escape his stint in the alternate reality that is the Upside Down last season, but the trailer promises that the upcoming season will only ratchet up the horrors.

The show's cast and creators unveiled the trailer during a panel at the San Diego Comic-Con Saturday, as well as set the release date. Every new episode of Stranger Things will be available for streaming on Netflix Oct. 27 — just in time for a spooky Halloween binge. It's still a few months away, but the three-minute trailer packs in so much action it will have you scrambling to revisit Season 1. That should make it easier to process the striking revelations of the trailer: Poor Will is still traumatized from the Upside Down; and, the mysterious telekinetic girl, Eleven, returns from her brush with obliteration. Clearly, as a voice intones during the trailer, "Nothing's going to go back to the way that it was. Not really."

After all, Season 1 depicted a town rocked to its core after Will Byers went missing in the Upside Down, and fan favorite Barb tragically died there. It won't be so easy for the characters most directly enmeshed in the terror to move on from it — no matter how much they may want to, as Stranger Things co-creator Matt Duffer told USA Today:

They're just trying to sweep everything under a rug and pretend everything is fine and back to normal, and it’s not. People have been affected psychologically, and then there are some potentially supernatural after-effects.

Those "potentially supernatural after-effects" abound in the trailer in the most unsettling of ways. There's blood, there's what looks like a middle-of-the-night search party, there's a baffled-looking guy freaking out over a switchboard. It's all a reminder of why Stranger Things already received 18 Emmy nominations — and an indication that the best is still to come.

More Like This
14 Baby Names Inspired By 'The White Lotus' That Deserve A Round Of Aperol Spritzes
'Virgin River' Has Wrapped Filming Season 5 & OMG Is Charmaine Still Pregnant!?
HelloFresh Is Releasing Spaghetti Meal Kits Inspired By Buddy The Elf
Meghan Markle Spent Her Thanksgiving Volunteering For A Cause Close To Her Heart