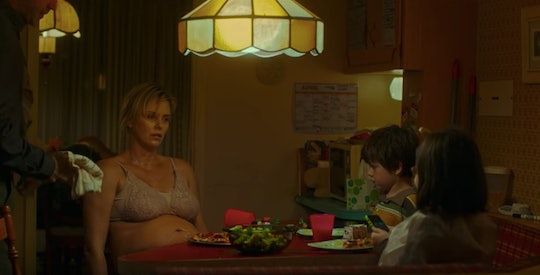 This Movie About Motherhood Is So Relatable, It Physically Hurts

When Diablo Cody and Jason Reitman make movies together, like Juno and Young Adult, magic happens. It's like they just look into your soul and *get* your life. This time around is absolutely no different, but instead of tackling being a teen or that weird time of life before you can start adulting, it's motherhood. And really, it will make you laugh and cry all at the same time. The new Tully trailer with Charlize Theron is heartbreakingly funny and seems to perfectly capture the struggles of motherhood without falling into silly tropes.

In the trailer, viewers meet Theron's Marlo, who is married to Drew, played by Ron Livingston. She has two kids and a newborn baby, and she's understandably having trouble juggling all of it. Her brother, played by Mark Duplass, suggests she get a night nurse, but she's not having it.

"I don’t want a stranger in my house. That’s like a Lifetime movie where the nanny tries to kill the family and the mom survives and she has to walk with a cane at the end," Marlo says in the trailer. But after spilling her breastmilk and struggling to get "sexy" with her husband after carrying a baby all day, she evidently decides to give it a try.

Then, Tully arrives, played by Makenzie Davis, saying that she's there to take care of Marlo, even though she's technically the nanny for the baby. Over time, it looks like the two form an intimate bond, reflecting on motherhood and life. Marlo waxes philosophic about getting older and how "your 30s come in like a garbage truck," while her kids ask her, after she takes her shirt off because a kid spilled his drink on her, what's "wrong with your body?"

It doesn't seem like she hires the nanny and everything gets better, because that's just not how life works. But something definitely changes. Theron further describes the movie to People, stating:

Tully watches her newborn overnight so that Marlo can get some sleep, and she becomes a surprising source of therapy and friendship for Marlo and she shows her what life can be like outside the mom bubble. But Marlo starts to realize Tully is not all that she seems.

For her part, Theron told the outlet that she was able to fully appreciate the role at this point in her life, as she's a mother herself. "I don’t think I could’ve done this film without having experienced motherhood yet, so this film came at the perfect time for me," she explained. "There’s so much pressure on parents to balance everything in their life so perfectly and to do it with a smile. So I wanted to tell a story that shows parents, ‘Hey, life is a lot harder for us, and it’s okay if you have to get help.’"

That personal experience helped, because her performance is real AF. After the film premiered at the Sundance Film Festival, Variety wrote a stellar review of her performance, stating, "Theron’s performance is fearless, emotionally raw, and physically intense, rippled with embattled waves of exhaustion and anger."

There's no doubt that motherhood can be a beautiful thing, but it's also messy, miserable, and something you can't just "quit" when you're over it. That's a lot to take on and it looks like Theron perfectly explores all of that in the most authentic way possible.

Tully comes out on April 20, so make sure you book your babysitter stat. You deserve this film.