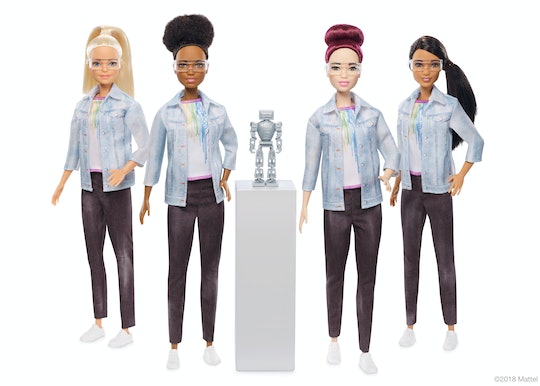 Mattel Released A New Barbie Today, & She Just May Be The Coolest, Smartest One Yet

She's held over 200 careers in the past several years, including stints as a computer engineer, Mars explorer, and video game developer. Now Barbie is taking on an exciting new field. Mattel just announced that the latest Barbies are robotics engineers, and they're about to help kids all over the world learn more about the STEM field in a fun, relatable way. Because let's be honest: kids love Barbies and robots, so these dolls are a great mix of fun and education.

Launched today, the robotics engineer Barbie is available in four skin tones and retails for $14 on Barbie.com and Amazon. She even arrives with safety goggles and a humanoid robot, giving kids all the props they need to envision Barbie in her own robotics lab. Who knows what kids will imaginatively design with the help of their code-savvy friend Barbie?

To make sure the doll was true to life, Mattel partnered with industry experts to make sure this Barbie was representative of the industry. And it looks like the experts have taken to Barbie's latest role with enthusiasm. "As a woman in robotics, it is great to see that Barbie has embraced this field as the Career of the Year – we need more women in STEM," said Dr. Cynthia Breazeal, Associate Professor of Media Arts and Sciences at the MIT Media Lab, in an email to Romper. "As a mother, I understand the importance toys have on the imagination of children and this is a great way to pique kids' interest in STEM." She's also a fan of The Jibo Be A Maker App as an intro program to teach kids how to code and control the robot that comes with the new fleet of Barbies. It looks like this version of Barbie can be inspiring and educational for all kinds of kids.

In addition, the new Barbie not only introduces kids to a new role model, but it also encourages the development of real-life coding skills. Thanks to Mattel's multi-year partnership with creative computing platform Tynker, the companies are launching six free Barbie-inspired coding experiences available starting now at Tynker.com. These games teach problem-solving skills and coding basics while encouraging children to work alongside Barbie. (Plus, the games look pretty fun, too.) Your kid can set up the foundations for a coding career or learn more about astronauts while simply playing with Barbie, which is a very cool concept.

Overall, the brand is looking to address the fact that only 12 percent of engineers are female and hoping to encourage more girls to enter science, technology, engineering, and mathematics (STEM) fields. To this end, the Mattel brand has also partnered with several other organizations and science professionals to make the STEM world more accessible to girls. One of its partnerships is with Black Girls CODE, which offers robotics workshops that reach young women who are interested in developing skills within the STEM fields. In addition, the Barbie brand has partnered with Information Science Professor and Coder Casey Fiesler, PhD, to release Code Camp for Barbie and Friends, an e-book about coding. With books, games, and the Barbie doll herself, girls everywhere are about to get a fun introduction to coding and its uses.

This multi-media approach is all part of Mattel's plan to bring more girls into the sciences. "For almost 60 years, Barbie has exposed girls to roles where women are underrepresented to show them that they can be anything,” said Lisa McKnight, General Manager and Senior Vice President, Barbie. “By playing with Robotics Engineer Barbie on and offline, we are giving girls a new platform for play in their imaginary world and teaching them important skills for their real world.” Combining imaginative play with real-life career exploration is a step in the right direction for future STEM kids everywhere. Who knows what Barbie's next exciting role will be?

More Like This
From Captions To Gifts, These Are All The Kindergarten Graduation Ideas You Need
It's Not Just Covid: Doctors On Why Everyone's Getting Sick Right Now
Here’s What You Need To Know About That Viral 1960s Baby Formula “Recipe”
Did You Choose One Of The Most Popular Baby Names Of 2021? We Have The List!