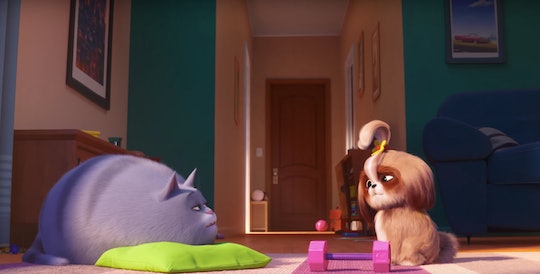 Your favorite furry friends are back on the big screen with a whole new mission. After a record breaking first film, Illumination followed that success with a sequel that is expected to be just as hilarious. Each of the Pets previews thus far have focused in on a single character from the all-star voiced cast, and the latest of The Secret Life of Pets 2 trailers is all about the adorable Daisy.

In the new trailer, Daisy the dog — who is voiced by Tiffany Haddish, a newcomer to the franchise — is on a mission. The clip starts with her on the hunt for Snowball, Kevin Hart's bunny character who takes on a superhero persona in the new film. "Excuse me, do any of you know Caption Snowball," she asks Snowball himself, as well Chloe the cat, voiced by Lake Bell. Snowball then dons his super suit and presumably saves the day.

The original The Secret Life of Pets film gave viewers a glimpse into what their pets are up to while the humans are out, well, being humans. Hart's Snowball came a bit unhinged when he lost his first owner. After finding a new home by the end of the first movie, it looks like Snowball has found a way to fill his time in the sequel: saving animal-kind.

The Secret Life of Pets opened in July 2016 and raked in over $875 million at the worldwide box office. Given the overwhelming success, it is no surprise that a sequel was to follow. The Secret Life of Pets 2 is set to release nationwide on June 7, 2019, according to Slash Film, with the first trailers premiering during the recent Grinch film starring Benedict Cumberbatch. The studio released the following synopsis:

The Secret Life of Pets 2 will follow summer 2016’s blockbuster about the lives our pets lead after we leave for work or school each day. Illumination founder and CEO Chris Meledandri and his longtime collaborator Janet Healy will produce the sequel to the comedy that had the best opening ever for an original film, animated or otherwise.

To promote the new film, Illumination has released a series of trailers, each centered around a different character. The first teaser trailer highlighted the main character of the first film, Max the Jack Russell Terrier. Max was originally voiced by Louis C.K., but has since been replaced with Patton Oswalt, according to ScreenRant. A second trailer quickly followed, centered around Chloe, and Snowball was the most recent character to receive a trailer of his own.

Much of the buzz surrounding the new film involved the decision to remove Louis C.K. from the lead role. While he voiced Max in the first film, the franchise did not choose Louis C.K. for the sequel, following his admission of sexual misconduct in 2017 after being accused of sexual harassment by five female comedians, according to Indie Wire. But Louis C.K.'s absence doesn't mean that you have to say goodbye to Max. Voice actor Patton Oswalt has taken on the role of Max in the sequel, as Pop Culture reported. You may recognize his voice from the popular Disney/Pixar Oscar winner Ratatouille, in which he voiced Remy.

Along with the inclusion of Haddish and Oswalt, the star-studded cast has also added Harrison Ford to the list of voice actors, Screen Rant reported. Other actors in voicing characters in the film include Jenny Slate, Hannibal Buress, and Albert Brooks.

The Secret Life of Pets 2 could prove to be your family's favorite new movie this summer. Check out the various teaser trailers for a recap of the characters and an introduction to Daisy before the film hits theaters.