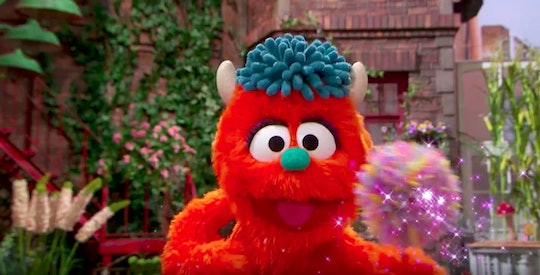 The Newest 'Sesame Street' Character, Rudy, Will Reach So Many Families

Beloved television show Sesame Street teaches kids about everything from the ABCs to the joys of cookie-eating. Now, the newest Sesame Street character, a monster named Rudy, has arrived, and the adorable puppet is so important because he teaches kids a new kind of lesson: Rudy helps to show kids the joys of being in a blended family. And hey, perhaps he'll help out some parents while he's at it.

Three-year-old Rudy burst onto the Sesame Street scene on Sunday's show, as the new stepbrother of fan-favorite fairy puppet Abby Cadabby. (Abby's mom married Rudy's dad.) The bright-orange, curly-haired Rudy gets himself into some scrapes, like when he "borrows" Abby's magic wand and needs her to rescue him from spells gone awry. Ultimately, though, it sounds like the show's creators hope to teach kids that blended families can be a really wonderful thing, even if transitioning into them might take some getting used to. As Sesame Workshop said in a statement:

Families come in many forms – including newly-blended families, which can present unique challenges for kids. As part of Sesame Street’s kindness curriculum, kids will watch as Abby and Rudy meet for the first time, get to know each other, and overcome their differences to embrace their new sibling relationship.

Change isn't exactly easy, especially when you're a kid. (I, for one, remember sobbing and sobbing when my dad shaved his beard.) But good children's television can be a powerful force. When children get to see representations of what they're going through on a show that features characters they love, they learn that they aren't alone. Watching Abby Cadabby learn to value her new stepbrother can help kids in blended families see that things will get easier for them too, and that they don't have to feel insecure about having a "different" family structure.

And for that same reason, Sesame Street's new character may also prove to be a comfort for parents who are having difficulties of their own getting used to a blended family, and who might feel guilty or worried about the challenges their children are facing in re-adjusting.

After all, as Rudy said on Friday, when Abby and Elmo introduced him to viewers on TODAY, moving to a new home was "a little bit scary at first because I didn't know anybody. But Abby introduced me to everybody on the street. And then it was fun!"

It seems likely that Sesame Street viewers will have a lot of fun themselves, as they get to watch Rudy and Abby's adventures.