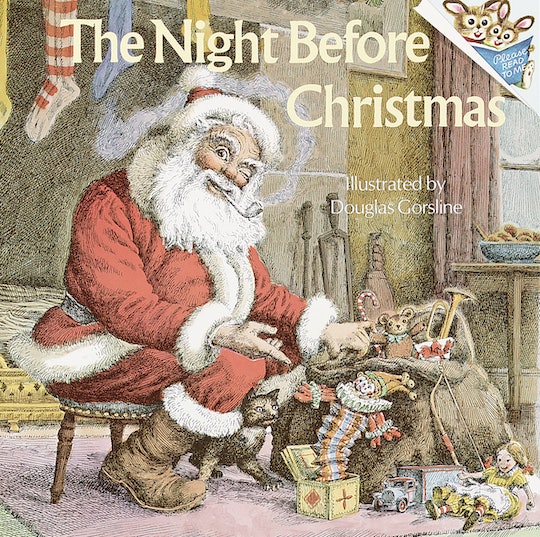 The One Book That Helped Cure My Loneliness During The Holidays

It may shock you that someone who wrote a book called How To Be Alone is not super into the holidays, but it’s true. My favorite holiday has always been Halloween, partly because it is very much my aesthetic, partly because I love horror movies and goth stuff, but also because Halloween is a holiday where you don’t need anyone at all to celebrate it. Christmas, however, oh my goodness you do. Thinking back to my childhood, the holidays are so unfortunately tinged with melancholy. But there’s one bright spot: The Night Before Christmas. Even for a lonely little kid, that book was soothing as hell.

First of all, it starts off with a huge house that’s quiet as f*ck, and uses the words “not a creature was stirring.” Do you know how beautiful that sh*t sounds to a 6-year-old, and to an adult who used to be a 6-year-old? So beautiful! Plus, it rhymes, which so many poems and stories do, sure, yes, but oh my goodness the imagery in this story. Sugar plums, guys!!! Sugar plums! I still, to this day, don’t know what those are at all, but I love them anyway! It sounds like a nickname Coach Taylor might have for Tami Taylor. Is it a really sweet plum? Is it a candy that’s shaped like a plum? I can’t know and I don’t care because I am so in.

The next great revelation of the book is the napping. Naps! The author says the mom and dad (I guess?) were settled in bed in their “kerchief and I in my cap” — which, already, oh my goodness, this is so cute!!! — but then we hear they’d “just settled our brains for a long winter's nap‍.” I can’t even tell you how incredible a long winter’s nap sounds to me as an adult. Do you sleep through until Valentine’s Day? Till March? That’s the life, my dude. I have no idea how you scored the ability to nap through an entire season but I salute you. Goodbye, SAD!

And then, after they’re done listing foods and/or Connie Britton characters, Santa appears!!! And somehow, through the magic of these words, it’s not just Santa. It’s this magical-surrounded-by-Christmas-lights Santa, giving off such a warm glow you swear he’s warming your insides and clearing your skin. This Santa is that evocative. Thank you, skin-clearing Santa!

Santa brings presents and also, spoiler: Santa has a “nose like a cherry,” which I don’t know if he has a cold or what, but that is adorable.

I was a kid who was raising myself, so the holidays were mostly just me feeling like sh*t and throwing myself into books and movies, which incidentally are full of lonely characters: Pippi Longstocking, Anne of Green Gables, Matilda, and an entire canon of British orphans being raised by prickly guardians. God bless books.

The ending is what got me every time and when I read it now, I can feel what it felt like to be a child full of wonder, full of belief in Santa, and a belief in magic… and confusion as to what “down of a thistle” was.

“But I heard him exclaim, ere he drove out of sight‍. Happy Christmas to all, and to all a good night.”

Goodbye, I am dead. This book gave me every possible feeling and I can finally sleep knowing that Santa is real, definitely coming to my house next month, and bringing me the entire wardrobe from Clueless in my size.

Lane Moore is a comedian and the author of How To Be Alone: If You Want To, And Even If You Don't out November 6 from Atria Books. You can follow her on Twitter and Instagram.