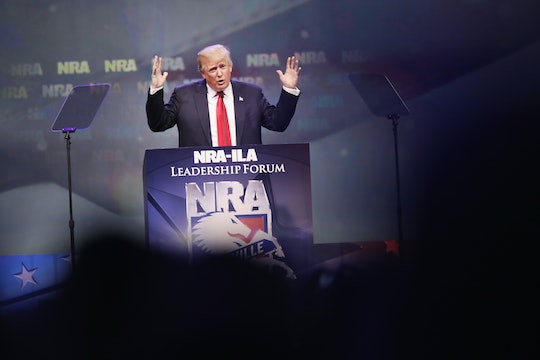 The shooting in Orlando nightclub Pulse has been officially declared the worst mass shooting in U.S. history. While communities around the world are reeling from this shocking, tragic act of hate and violence, pro-gun rights group, the National Rifle Association has remained distressingly silent on the matter. The NRA's response to Orlando is indicative of its unwillingness to help fix gun laws. Given the number of deaths by gun violence this year, the NRA's stubborn, uncompromising stance toward gun regulation is frustrating and dangerous. It continues to block moves to improve gun safety despite evidence that it would reduce tragedies such as the one that happened in Orlando, Florida. The NRA did not immediately respond to Romper's request for comment.

According to the New York Times, the shooter, named Omar Mateen, opened fire on the crowded club and took hostages while negotiating with the police. He was killed in a stand-off with local law enforcement after holding the club for hours. Just before his death, he had called 911 to pledge his support and allegiance to ISIS. Because of that call, the incident is being investigated as a hate crime as well as an act of terrorism.

Like the San Bernardino, California, and Newtown, Connecticut, shooters, Mateen used an AR-15, a weapon able to fire multiple, high-velocity rounds at once. The New York Daily News reported that there was a call to ban the weapon — and other military-grade assault weapons like it — following the Newtown shooting. The publicity for the weapon caused a spike in sales, and the NRA fought the ban to keep the AR-15 in circulation. The gun had been prohibited under a 1994 federal assault weapons ban, but that ban had been allowed to expire in 2004 after intense lobbying by the NRA, according to the Daily News.

According to the New York Daily News, Richard Aborn, a strategist with the Citizens Crime Commission in New York City, said that the ban had made a difference. He said, “During the decade of the ban, there were half as many casualties in mass shootings as the decade before, and a third as many casualties in mass shootings as the decade after.” Despite its active social media and web presence, the NRA has been noticeably silent on the Orlando shooting. It has not posted on its site about the event to express its sympathy, nor has it posted about the shooting on its Twitter account.

It did, however, post in January about the AR-15. Its blog posted an articled titled, “Why the AR-15 Is America’s Most Popular Rifle.” It reviewed the gun, saying that it could be “wrapped in all different types of colors and patterns,” and that its “customizability allows for all types of stocks, barrel and carbine-lengths." The NRA went on to say that it was wonderful the rifle had “so, so, soooo many accessories." The rifle's capacity was definitely proven early Sunday morning when Mateen, outfitted with hundreds of rounds of ammunition and a gun customized for rapid-firing, walked into Pulse.

The NRA's silence is hurtful to those suffering, but it is not new. Following previous shootings, it has generally been quiet for some time before responding to a tragedy. It may still post about the shooting in Orlando, but when it does, its response will no doubt be the typical line: that there is a need for more guns, rather than less. When it comes to lives lost due to gun violence, the NRA generally takes a defensive stance, saying that it is being blamed for one outlier that could have been stopped earlier with a well-aimed shot.

In 2012, after the Sandy Hook shooting, the NRA did not comment for several days. When it did, it called for teachers to carry guns in schools. According to the Washington Post, NRA Executive Vice President Wayne LaPierre said, "The only thing that stops a bad guy with a gun is a good guy with a gun."

The response was similar in November 2015, after the Colorado Springs Planned Parenthood shooting. First, it posted an infamous tweet wishing "shooters" a "happy Friday." Then a guest speaker on NRA News used the tragedy as an opportunity to gain support for concealed weapons, according to Media Matters. The guest's name was Laura Carno, and she said, "I would have loved it if somebody who worked at Planned Parenthood, or one of the patients, or somebody who was waiting had a concealed carry permit and was able to stop this guy before he killed three people and injured nine or ten others."

When and if the NRA does comment on Sunday's devastating shooting, it is doubtful it will broach the subject of gun law and gun safety reform. The NRA has long evaded government oversight, and while there is strong motivation now to revisit the subject, the fight will be a difficult one. The NRA has vocal supporters inside and outside the government ready to block any discussions about the epidemic of gun violence in the United States.