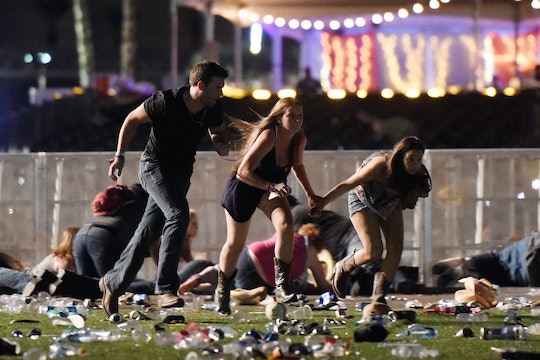 As the nation awakens to the deadliest mass shooting in its modern history, calls for gun law reform have clamored in the wake of at least 50 dead and another 500 people injured. As vocal as gun safety advocates have been since Sunday night's horrific shooting, the NRA's response to the Las Vegas shooting has been lacking, to say the least — as of Monday morning, the National Rifle Association had not yet issued a formal statement.

On Twitter, conservative radio host and NRA spokesperson Dana Loesch offered her condolences in a series of tweets, but had no statement on the issue of gun safety beyond encouraging a Twitter user to "temper" their "politics" on the issue. In June, Loesch featured in a controversial NRA Facebook ad that tiptoed on the line of calling for the armed insurrection of NRA members against liberals and gun safety advocates.

Wayne LaPierre, NRA's CEO and executive vice president, has been equally as silent as the organization he heads: His Twitter feed has been inactive for the last five months, with his most recent tweet praising President Donald Trump. Trump called himself a "champion and friend in the White House" to the NRA during its annual convention in April.

The lack of a response from the NRA so soon after a mass shooting isn't necessarily surprising, for a variety of reasons: Not only does it need time to whip up its PR machine, it's just the organization's M.O. After the Sandy Hook massacre, the NRA took a week to respond to the shooting in 2012. After the 2007 Virginia Tech mass shooting, the NRA took four days to issue a response, making a particular point to tell people how they should react: "This is a time for people to grieve, to mourn, and to heal. This is not a time for political discussions or public policy debates." (You'll notice Loesch's sentiments are nearly identical.)

Following last year's Pulse Nighclub mass shooting in Orlando, Florida — which, previous to Sunday was America's deadliest mass shooting — the NRA got it together and published an op-ed response to the Pulse shooting within 24 hours. Again, like so many other lackluster and formulaic responses to mass shootings, the NRA was quick to blame anything but the guns themselves, calling for the destruction of radical Islam, "not the right of law-abiding Americans to protect themselves," LaPierre wrote.

The NRA's responses to mass shootings have historically been lacking in its ability to specifically call out the problems with gun laws in the United States, but again, it's not surprising that a gun lobbying organization wouldn't speak out against its own financial interests. According to Business Insider, the NRA has already spent more on lobbying during the first two quarters of 2017 than it did the entire year previous.

One of the most concerning recent lobbying efforts by the NRA is to make it easier for people to buy gun silencers. South Carolina Rep. Jeff Duncan introduced the law earlier this year, with debate on the bill delayed following the shooting of a congressman, Louisiana Rep. Steve Scalise, in June. The bill is up for a vote this week in the House. According to POLITICO, the successful passage of Duncan's gun silencer bill is one of the NRA's "top legislative goals" this year.

If you're waiting to hear from the NRA on its response to the Las Vegas shooting, don't hold your breath. It will easily be at least a solid 24 hours before it responds, as the organization has typically waited in the past. Still, don't expect it to be anything more than "it's not the guns, it's the people" and "now's not the time for politics," and "the answer is more guns, not less."