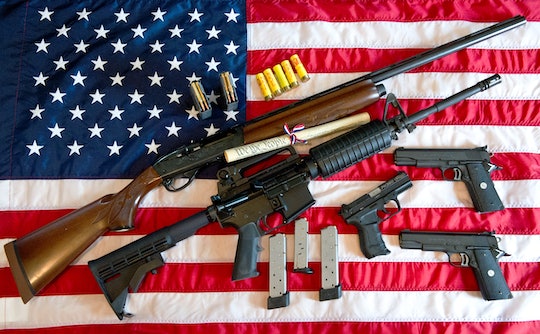 The NRA's Terror Watch List Suggestion Is Great, But Still Not Enough

On Wednesday, Senate Democrats decided to take the floor and filibuster to convince Republicans to start accepting some legislation on assault weapon bans and other gun reform. It's good timing, for sure. Especially since the National Rifle Association made a terror watch list recommendation, too, on Wednesday, admitting that anyone in the Terrorist Screening Database should be stalled or prevented from buying a firearm. The NRA's terror watch list suggestion is great, but it's not enough. It's not. This is where irresponsible gun advocates (and politicians who take absurd amounts of money from the NRA, one of the biggest lobbies controlling Washington D.C.), start tweeting angrily, why isn't it enough?

The NRA's statement was perfectly timed, if delayed, as a response to the Orlando shooting. It's perfectly timed because the shooter had been investigated by the F.B.I. in the past for possible ties to terrorism. The Orlando shooter was on a list and then taken off a list because there was no strong case against him. Had he remained on the list, under the NRA's suggestion, maybe there would have been a way for the gun store (assuming all weapons are bought through legal channels) to call in the feds and have a little talk with the shooter before he walked into that nightclub. The NRA's statement is convenient, at best.

At worst, they're using the "Shaggy Defense."

Because, just going down party lines, the NRA's statement plays into the narrative of domestic, (read: Muslim) radicals that claim to allegiance to known Islamic fundamentalist and terror groups overseas from getting guns. It's not about controlling the flow of weapons or what kind of weapons can be sold in any kind of market on American soil. It's about broadening the federal government's ability to profile brown people — it's not about gun law reform. This is the meat of their statement:

Anyone on a terror watchlist who tries to buy a gun should be thoroughly investigated by the FBI and the sale delayed while the investigation is ongoing. If an investigation uncovers evidence of terrorist activity or involvement, the government should be allowed to immediately go to court, block the sale, and arrest the terrorist. At the same time, due process protections should be put in place that allow law-abiding Americans who are wrongly put on a watchlist to be removed. That has been the position of Sen. John Cornyn (R.-Tex.) and a majority of the U.S. Senate. Sadly, President Obama and his allies would prefer to play politics with this issue.

It's not politics to say that civilians shouldn't be allowed to buy assault-modeled weapons. There's no need for a firearm that's designed to shoot 40 rounds a second to be sold to regular citizens. This is not Fallujah. These are our schools, our bars, our streets. There is no tyrannical government invading our homes, no matter how much Donald Trump wants you to think it's true. Newsflash: The British aren't coming anymore and we could stop domestic terrorists, of all sorts, by making it difficult for them to get their weapons.

The AR-15 — the common name for similar, Colt-produced M16s for civilians, or the Sig Sauer MCX rifle, which was the actual weapon used in the Orlando shooting — can shoot about 40 rounds per second. Hunters can take out grizzly bears with two rounds. And coming from Pennsylvania, where we "cling to our guns and religion," any guy who can't take out a bear with two rounds shouldn't even be allowed to be the beer bitch on a weekend hunting trip. Sorry, not sorry.

Semi-automatic weapon bans will be fought tooth and nail by gun advocates, because, hunting. So will these civilian-style assault weapons. But don't be fooled by the NRA finally going "soft on guns" or compromising just because they are OK with making people on a terror watch list wait to buy a weapon.

The NRA still doesn't want universal background checks. They don't want to limit magazine capacity or modify firing mechanisms to slow that shit down. In some European countries, assault weapons are available for purchase, but with modifications and regulations on how many rounds one gun can fire. Why can't we at least do that? The Orlando shooter killed 49 people. I'm guessing he was a bad shot, but theoretically, he could have taken nearly all of them out at one time. And what about just taxing firearm purchases?

I'm not a gun law policy wonk, but it seems do-able or at least worth talking about. In New York City, I pay a shit-ton more money than anyone else for a pack of smokes because of the "nanny state." The nanny state could put exorbitant taxes on firearms, like they do cigarettes or tampons. What makes guns so sacred? The Constitution was written to be amended.

Wayne Lo, who shot a professor and a fellow student at Simon's Rock College in 1992, said this week that if he had had to wait a few days, he thinks it might have stalled him. Adam Lanza would never have been on a terror watch list because he was a white man with mental health issues but he used an AR-15 style Bushmaster to slaughter those children. We missed tracking the San Bernadino shooters, but they had them too, though their guns were modified because they were sold in California, which does have some restrictions, to make them more powerful.

The NRA and the politicians who take their money and your crazy friend on Facebook will point out these discrepancies. It could have happened anyway. Yea, the Cleveland Zoo had a gorilla exhibit for decades before a toddler fell into it. We wear seat belts even though sometimes they don't save people in car accidents. We tax cigarettes and people die from lung cancer. We rinse our FDA approved chicken before we roast it. We take precautions.

But if anything, if you can't see why some prohibitions and hoops to jump through and straight up bans should be put into law when it comes to buying guns, then I appeal to your American patriotism. We should be better than this.

More Like This
20 Of The Best Movies To Watch This 4th Of July
20 Family-Friendly Movies To Watch With Your Kids On The 4th Of July
The FDA Is Warning Parents To Not Use Baby Neck Floats After One Infant Died
Sarah Michelle Gellar Is Facing A Terrifying Parenting Milestone: Sleep Away Camp