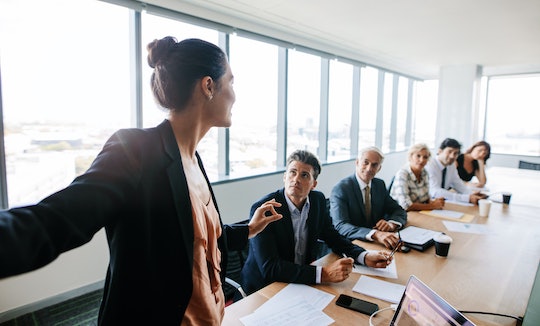 The Number Of Women Facing Hostile Workplaces Is Appalling, But Not Shocking

According to Fortune, a recent survey of American workers found that a disturbing number feel stressed and face hazardous conditions — and even hostile environments — at work. The RAND Corporation, in partnership with Harvard Medical School and the University of California, Los Angeles, surveyed more than 3,000 American workers about workplace conditions, and found that more than half — reportedly 55 percent — of United States workers say they deal with working in "unpleasant and potentially hazardous" conditions. In particular, the survey found that sexual harassment in the workplace is still very much a concern. The number of women facing hostile workplaces because of sexual harassment is appalling, but not exactly surprising.

Fortune reported that, while 55 percent of U.S. workers said they work in "unpleasant and potentially hazardous" conditions, about 20 percent of survey respondents said that they work under "hostile conditions" that include "sexual harassment reported by many young women." Specifically, the survey stated:

And that "the most–highly correlated adverse events" are sexual harassment and unwanted sexual attention.

And forget about work-life balance: according to Fortune, Americans also reported having trouble taking off work for other, personal obligations, and 78 percent of those surveyed said they must be physically present at their jobs every day. That makes it tough for, say, working moms — and other studies have proven that assumption. A recent survey found that moms put in 98 hours of work every week after combining time spent on family duties and regular work duties.

The "Working Conditions in the United States" report specifically stated that nearly one in five American workers are exposed to "a hostile or threatening social environment" at their workplace. And while the incidents of hostile experiences can vary by age, gender, and education, according to the results of the survey, younger and "prime-aged women" are more likely to experience unwanted sexual attention at work.

But the thing is, this is probably not news to most women. For example, according to a 2016 article in The Atlantic, a 2015 report found that one in three women science professors surveyed reported sexual harassment. Another 2016 article, this time on Fast Company, found that 60 percent of women located in Silicon Valley and the San Francisco Bay area reported being targeted for unwanted sexual advances from a superior. And, according to The Huffington Post in 2015, a survey at that time found that, overall, one in three women between the ages of 18 and 34 had been sexually harassed at work.

Any reports or surveys about sexual harassment at work are disgraceful, but to most women, they are no surprise. No matter the industry, sexual harassment is an ongoing concern for women in the workplace. This newest survey just emphasizes that, yet again.

So what can be done about it? For starters, the American Association of University Women offers tips for what women can do if they feel they are facing sexual harassment at work, and the steps start with consulting your employment policies and taking notes on any interaction that makes you uncomfortable. The tips include telling supervisors or your human resources department, and, eventually, filing a complaint with the Equal Employment Opportunity Commission if an employer does not take appropriate action against the offender. Other, similar organizations like the National Organization for Women, New York City chapter, offer resources to deal with sexual harassment at work as well.

The results of the RAND Corporation survey may be appalling, but they are, unfortunately, not surprising to many women. A very important action you can take if you feel you're facing a hostile workplace environment — sexual harassment at work in particular — is to get help and report the behavior. Because there are things that can be done, and, clearly, you are not alone.