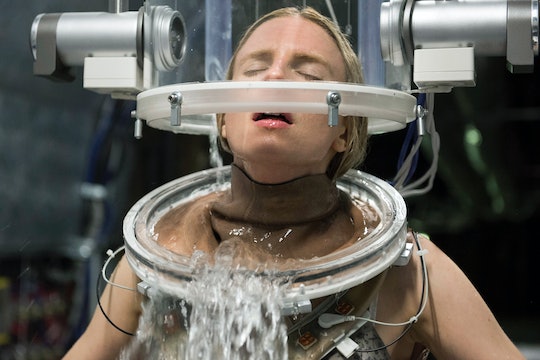 (Warning: this post contains spoilers from The OA Episode 7.) Netflix's new drama, The OA, has left fans with a lot of questions, but thankfully they're starting to get some answers. The show tells the story of Prairie who disappeared seven years ago as a blind young woman and returns being able to see and referring to herself as The OA. And even though it took a little while, The OA meaning was finally revealed in Episode 7.

After Prairie attempted to escape from Dr. Hunter Hap, he knocked her in the head so hard that she died for the second time. This time when she met the same woman from before, she was given a choice: be at peace with her father or swallow the bird she held and return to the others. Although Prairie wanted to be with her father, she chose to eat the bird and return, learning what it truly meant to make a sacrifice. When she woke again she had her sight back and told the others what happened to her and how she believed they could find a way out if they just worked together. By swallowing the bird, Prairie had been given knowledge and together, with the other three, they came up with a plan so that Homer could stay awake during Hap's experiments.

Hap was killing them over and over again and Homer wanted to be awake so he could also swallow a living creature and learn what Prairie had learned. Although Homer was able to swallow a sea creature, at first he didn't feel the same understanding that Prairie felt and so she tried to explain it to him, telling him that it was like something calling to her.

"It's a name truer than Prairie," she said. "Nina even." She then proceeded to try to give voice to the name inside her head, claiming that it sounded like, "away" or maybe even "O-A." Then, in Episode 7, in an effort to try to explain what happened to her to her mother, Prairie declared that she's the Original Angel, the OA. So it turns out OA is actually an acronym and there's a reason why she's leading the others. As the first angel, it's her job to lead her new friends to help her open the tunnel to another dimension to save Homer and the others. Hopefully she'll be able to succeed.