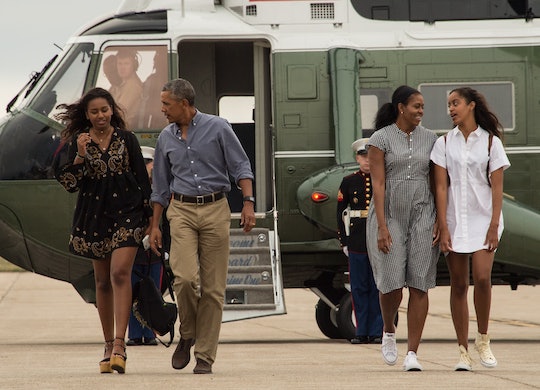 Like Most Families, The Obamas Are Getting Fed Up With Each Other In Quarantine

The Obamas may be former occupants of the White House, but they're actually not all that different from many other American families. Case in point? After months in quarantine, the Obama kids are sick of their parents — and maybe their parents got a little sick of them, too.

In a virtual appearance on Conan on Wednesday, former First Lady Michelle Obama told host Conan O'Brien that although her family had enjoyed getting to spend time together when the coronavirus pandemic had first forced folks to stay home in March, they'd since had a change of opinion. "I think first our kids got a little sick of us," Michelle explained. "Which was fine, 'cause we were pretty much sick of them."

When COVID-19 cases first began to surge in the United States, 22-year-old Malia and 19-year-old Sasha were both away at their respective universities. Like millions of other college students, the two were forced to return home and transition to remote learning when the novel coronavirus outbreak was declared a global pandemic.

Michelle told O'Brien that initially the family was "all excited to be together." "We were being all organized and we would spend the days apart doing our respective work — the girls were still in classes in the spring — and so we would be working and then doing a little exercise, and then come together in the evenings," she said. "We would have these activities — we would have cocktails, and then we would work puzzles, and play games. Barack taught the girls how to play spades."

To help keep things interesting, the family would even organize themed activities. "We actually had some organized things," Michelle explained. "We had an art exhibit day, where we all went off and did like water color paintings and then we showed it."

But as the months passed and quarantine dragged on, Malia and Sasha apparently became less and less enchanted about the idea of so much unexpected family time. In fact, by summer the girls were "a little sick" of their parents, according to Michelle.

"So the summer started happening, and then we could be outside a little bit more, and we came to the vineyard, where we still are, and so there's more room to roam around," Michelle said. "That was good, 'cause it helped us break it up. And now the kids are back in Zoom land with classes. They're doing it remotely. And they're no longer thrilled about being with us."

The Obama kids certainly aren't alone in feeling frustrated at being trapped back at home with their parents. Teens and college-age students have admitted to finding it difficult to adjust to life back under their parents' roof and rules.

Even adults have admitted to feeling the effects of quarantine in their relationships. According to Forbes, only 18% of married and engaged quarantining couples surveyed by The Knot and Lasting reported feeling satisfied with their communication and most reported fighting more often in quarantine than outside of it.

Thankfully, it doesn't seem as if quarantine has led to Michelle and former President Barack Obama being fed up with each other. Michelle told O'Brien on Wednesday that, because of his busy writing schedule, Barack has had "limited time" to get on her "nerves." In case you missed it, the former president is expected to release his latest memoir, A Promised Land, in November.