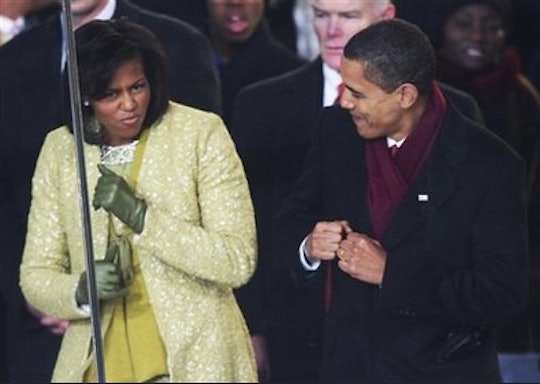 The Obamas Reveal Their Holiday Playlist, And It's Just As Cool As You'd Expect It To Be

If there was any doubt that President Obama is the coolest cat to have sat in the White House (he popularized the fist-bump, is friends with Queen Bey, and chose Lauren Groff's Fates and Furies as his favorite book of the year) wait until you listen to his holiday playlist. On Wednesday, the White House released holiday playlists from President Obama and Veep Joe Biden on Spotify.

This doesn't come as a major surprise to me: President Obama has been culturally in tune with Millennials since he ran his campaign in 2008. Sharing his Spotify holiday playlist with his nation of "friends" is another way the President is relating to his constituents, and showing that he's got some dope taste in music (natch) in the process.

So what will the Presidential family be listening to over the holidays? Why, a little Mariah, a little Eartha, Frank Sinatra, and Destiny's Child (of course), just to name a few. (What? No Christmas and Chill? Maybe that's reserved for the afterparty.) “O Tannenbaum,” by the Vince Guaraldi Trio, the jazzy version that plays during the television show, “A Charlie Brown Christmas," and Nat King Cole’s “The Christmas Song” round out the list. You'll also find tons of jazz classics, a little gospel, Big Band classics as well as Motown hits.

The Jackson 5’s version of “Santa Clause is Coming to Town” (a personal favorite) and Boyz II Men's “Let It Snow” (which I am downloading rn) also make the cut, as well as Whitney Houston's "Little Drummer Boy" (which totally makes me weep).

In a culture where your taste in everything from clothes to food to music is up for coolness approval, President Obama is slaying it.

And it doesn't hurt that he knows how to keep a beat.

But what about Joe Biden's musical tastes? What's the Veep into? His rotation is heavy into rock n' roll, with a ton of Bruce Sringsteen, (The Boss' version of "Santa Claus Is Coming To Town is fire) Neil Diamond, Kenny Loggins, and Tom Petty.

I've got a feeling President Obama might be down with The Boss...

Also on Joe Biden's playlist is Coldplay's “A Sky Full of Stars,” said to be an "homage to his late son Beau Biden," who died earlier this year of brain cancer and was a Coldplay super fan. Rounding out his list is a little opera, and some tunes from Lady Gaga's pal, Tony Bennett.

From the sound of things, the First Families will be getting their groove on.

And why shouldn't they? It's Christmas!

This is a president who's been referencing Jay Z even while back on the campaign trail, according to MTV, so... I mean... at 54, he's in touch with what's on fleek.

When discussing good legislation, President Obama has said it's like a "good piece of music." And if his holiday playlist proves anything, it's that the man knows good music.