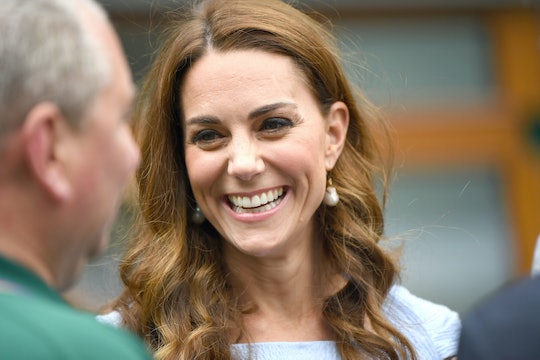 From the moment she became pregnant and gave birth to her first child, Prince George, critiquing and examining anything and everything about Kate Middleton has, sadly, become all too common. But a new rumor circulating about the Duchess of Cambridge shows that, really, the obsession with Kate Middleton's postpartum appearance has truly gotten out of hand, as Kensington Palace has had to officially respond to whether or not the royal mother of three received an elective treatment.

On Wednesday, Page Six reported that a cosmetic surgeon in London named Dr. Munir Somji posted a faux "before and after" shot of Middleton to his Instagram, saying: “Our Kate loves a bit of baby Botox.” Of course, the post made it seem as though Middleton was treated by Dr. Somji, which is misleading, because not only do we not know that, royals don't do commercial endorsements, neither would a health professional be able to disclose if they treated them without their explicit consent.

For the record, there's nothing wrong with Botox. If that's what you want, great. If not, also great. It's really no one's business but your own. But in order to settle things once and for all, Kensington Palace issued a statement regarding the ruthless speculation that Middleton had work done after her third baby was born.

A spokesman for Kensington Palace told New York Post that Dr. Somji's post is “categorically not true” and “in addition, The Royal Family never endorse commercial activity," meaning that posts such as those should always be regarded with skepticism. The original post from Dr. Somji has since been deleted.

Even though it's been over a year since Middleton welcomed her third child with Prince William, Prince Louis, the scrutiny and obsession with her postpartum appearance seems to be never-ending, as evidenced by this latest rumor and conversation about the duchess.

Before this, in 2018, Keira Knightly criticized Middleton for her postpartum photos outside the Lindo wing. "She was out of hospital seven hours later with her face made up and high heels on," she wrote in an essay, according to E! News. "The face the world wants to see. Hide. Hide our pain, our bodies splitting, our breasts leaking, our hormones raging. Look beautiful, look stylish, don't show your battleground, Kate." Other women even started posting photos of themselves postpartum to show the world what it "really" looks like, BoredPanda reported.

Beyond all that, one tabloid, in 2018, speculated about her weight and mental health following the birth of Prince Louis, with "Kate Middleton Weight Crisis After Postpartum Depression Claims" as the headline.

During and after pregnancy, your body goes through an incredible number of changes, some of which are visible, and others of which are not. As the future Queen of England, Middleton is constantly in the public eye and, presumably, under a great of pressure. It's impossible for the world to know how exactly she was feeling hours after she gave birth and the expectations placed upon her. The scrutiny about her appearance then and now is, needless to say, absurd.

Ultimately, whether it's your postpartum body, face or skin, the amount of interest that's taken in other people's appearance is generally unhealthy. When so much stock is put into these surface-level, arbitrary things, we lose track of what's really important, like the character of the person themselves. The more understanding, forgiving and open-minded we can be to people in the public-at-large, the more we can be to ourselves behind closed doors as well.