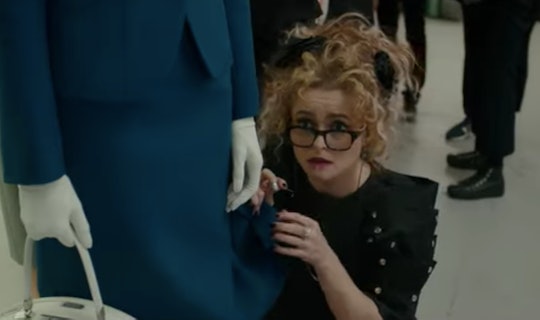 The ‘Ocean’s 8’ Trailer Is Finally Here, & The All-Woman Cast Is *Everything*

The gang's all here and they're ready to steal your bling. The first trailer for Ocean's 8 is available and it showcases the new film's big name cast and all the sparkly trouble that they are set to get into. The all-women take on the classic heist franchise provides fresh faces for the con job of a lifetime. Set for a summer 2018 release, it already has the public thrilled for the reboot.

Leading the latest band of thieves is Sandra Bullock, starring as Debbie Ocean — original head honcho Danny Ocean's (played by George Clooney) sister. Fresh out of a stint behind bars, Debbie puts together a squad of her own to rob the annual Met Gala of its prized jewels. Cate Blanchett, Rihanna, Anne Hathaway, Mindy Kaling, Sarah Paulson, Awkwafina, and Helena Bonham Carter join her to go after a diamond necklace worth millions.

Along with the seven thieves included in the syndicate, other stars such as Kim Kardashian, Kendall Jenner, Zayn Malik, Katie Holmes, Hailey Baldwin, and Olivia Munn make appearances and further beef up the A-List screen credits, according to People. Because the heist is set at a fashion show, famous designers like Alexander Wang and Tommy Hilfiger are also featured. Even Anna Wintour will be seen on screen, because what is the Met Gala without its resident fashion expert?

As in the original Oceans films, each member of the female syndicate has her own specific skill set that helps the plan come to fruition. In Oceans 8, Kaling plays a professional jeweler, Rhianna appears to be some sort of hacker, Bonham Carter is the fashion expert, Paulson is a reluctant mom who is out of the game, and Awkwafina is the hustler, according to The Verge. They all come together to go after target Anne Hathaway and her $150,000,000 necklace.

The film has had fans in a frenzy for the past year, ever since it was announced in January. Interest was heightened by the release of the official film poster on Dec. 14 and even more so by the new trailer. Judging by the reactions on Twitter, fans are quite pleased with the casting.

Individual members of the crew were picked out by some users, such as the presence of Her Royal Highness Rihanna.

Cate Blanchett has her own admirers as well.

One appearance that didn't go over very well with the Twitter-verse, somewhat surprisingly, was the short popup of James Corden.

I'm not sure where all the anti-Corden sentiments came from, but it looks like he is only making a cameo so hopefully these people can take a few deep breaths and let it go. (He gets one line in the trailer, and that very well could be all that he gets.)

Of course, along with the star worship and Corden comments, there were those who couldn't help but express their disdain for an all-woman cast. From making sexist comments about women not getting along to suggestions that women lack creative thinking, the misogynists were out in full blast. Ugh.

But voices of reason also offered their opinions on the unnecessary negativity aimed at a movie that doesn't rely on male main characters. Thank Sandra Bullock for that.

Thankfully, I saw many more tweets supporting the powerful female cast than woman haters, so feminism will prevail. Considering the mixed reviews of the all-female Ghostbusters remake, viewers will likely either love or hate the latest Oceans film. I, for one, am completely on board for a group of women being as badass as it gets. My only question is, why does summer have to be so far away?