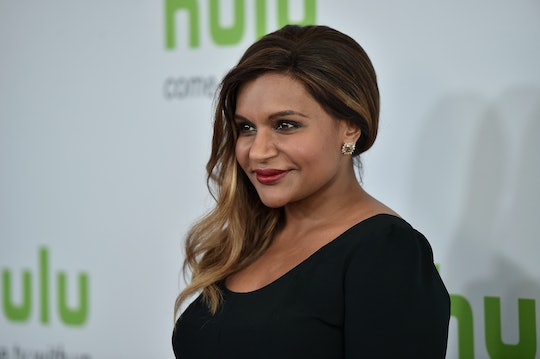 E! News reported on Monday that "multiple sources" told the outlet that Mindy Kaling is pregnant with her first child. Fans freaked out over the news, with many celebrating Kaling's pregnancy with The Office memes, because honestly, Kelly Kapoor would be going bonkers if it were her. Fans were just happy for Kaling, which is a pleasant relief from the shaming that often comes when an unmarried woman announces a pregnancy. Thank goodness we can just celebrate with some amazing references from The Office.

E! News reported that the pregnancy was "an unexpected surprise" for the actress, but that she's happy about it and that it will not affect her plans when it comes to The Mindy Project or any other projects.

And, according to Us Weekly, Kaling told Yahoo! Style in September 2015 that she definitely wanted kids at some point — she just didn't want to plan it out:

It's clear that fans are definitely feeling as though the news is "fast and loose" and unexpected, but in the best way. Many believed that Kaling's The Office character Kelly Kapoor was somehow foreshadowing or predicting the event when she pretended to be pregnant with Ryan Howard's (played by B.J. Novak) baby in the show.

A lot of fans also wanted to know who Kaling is dating and who the baby's father is, despite the fact that the question is wildly inappropriate and invasive.

This Twitter user took note of the tension between not wanting to invade Kaling's privacy and being hopeful that the baby's father is B.J. Novak, whom Kaling has had an on-again, off-again relationship with. Most recent reports say the two are just close friends, according to TIME.

But most people kept their congratulations simple. This reaction, for example, is in French, but the GIF says it all:

And some didn't use Kelly Kapoor GIFs, but instead opted for a still-appropriate Michael reaction:

Regardless of their GIF of choice, it was clear that fans are nothing but ecstatic for the rumored expectant mom. Now fans await her announcement, which is sure to be either incredibly low-key and chill, or completely hilarious.