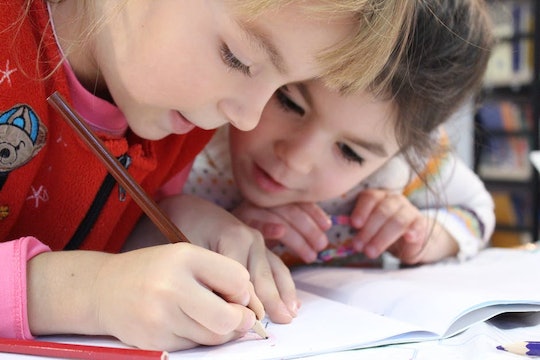 How Your Kid's Birthday May Predict Which College They Go To

Lots of parents will do pretty much whatever it takes to make sure their kids have the best possible chance of reaching their full potential — both in the classroom and beyond. That could mean reading to them from a young age or getting them started on SAT prep classes when they get older. But there's one factor contributing to scholastic achievement that moms and dads often don't think of: A kid's age compared to his or her classmates could predict their academic success later in life. In fact, as new research suggests, the oldest kids in class are more likely to graduate from a top college, like Harvard or Princeton.

Typically, the cutoff birthday for kids starting kindergarten is at the beginning of September. As a result, the kids with September birthdays are generally a whole year older than their classmates whose birthdays fall in August of the following year. And researchers from Northwestern, the University of Florida, and the University of Toronto concluded in a study of a large but unnamed Florida county that those older kids seem to have an advantage that extends all the way through college. The differences in academic achievement weren't gigantic, but they were significant.

If you recognize a child is struggling, it may make sense. But it should be a developmental tool to help the kids — not a tool to give them an extra edge.

And among some of the most striking findings was that the older kids were a whopping 15 percent less likely to end up incarcerated by the time they turned 16.

The study even found that the practice of academic red-shirting — deliberately holding kids back so they're a year older at the start of school than they would have been — helped to mitigate those effects. But as education policy researcher Michael Hansen wrote in an op-ed for U.S. News & World Report last year, doing so is oftentimes a privileged choice. After all, delaying the start of school often keeps a parent from going back to work full-time or makes it necessary for families to continue shelling out for expensive childcare.

Study author and Northwest University economist David Figlio believes that this phenomenon can be partly explained by the fact that, when children are elementary-age, a full year difference in age can mean a significant gap in cognitive and social development, according to NPR.

While these findings are certainly intriguing, there are still plenty of other ways to boost a kid's academic achievement and keep on them on track, such letting them learn to play a musical instrument and making sure they get enough aerobic exercise.