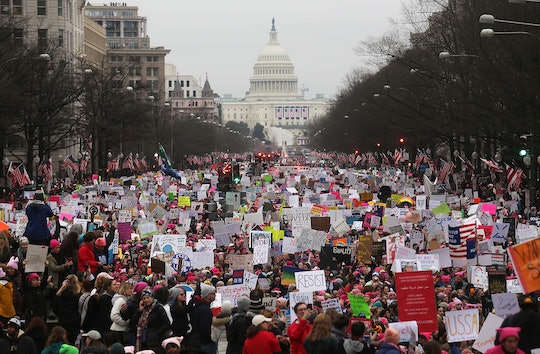 The One Huge Thing The Women's Strike Is Missing

The organizers of last month's ground-shaking Women’s March on Washington have announced plans for the next major statement of resistance against the new administration. The millions of women galvanized by the global protest are being asked to channel their energies to participate in a one-day strike taking place in March. Certainly, a widespread strike would send a powerful message about women’s voices and the potential impact on the country’s economy. But there’s one huge problem with the Women’s Strike that could derail the organizers' message entirely and further erode the chances for solidarity within the feminist movement.

According to an Instagram post on the Women’s March official account, the general strike is planned for March 8 to coincide with International Women’s Day. “In the spirit of women and their allies coming together for love and liberation, we offer a Day Without A Woman,” read the post caption. “We ask: do businesses support our communities, or do they drain our communities? Do they strive for gender equity or do they support the policies and leaders that perpetuate oppression?”

Those are important questions. And asking countless women to concentrate their activist energies to opt totally out of the economic system for a day — staying away from jobs, schools, and businesses — would indeed send a powerful message. But there’s a serious problem that the organizers have yet to address.

The ability to be absent from work without fear of losing their jobs is a luxury that not all women can afford. By leaving behind women working in hourly wage jobs, women without paid time off, and single mothers without reliable childcare, the organizers of the Women’s March are (once again) in danger of drawing a bright line that separates millions of supporters according to their economic privilege.

It’s maddening that this is even an issue, considering addressing gender equity is stated as a major goal of the protest. One of the reasons the gender wage gap persists is that women are more likely to be trapped in jobs that don't allow much flexibility, or offer benefits like paid time off. In fact, the National Women’s Law Center estimated that 13 million women work in low-wage jobs making an average of $10.10 an hour or less — that’s at least two out of three low-wage workers. And while women of color make up 16 percent of the overall workforce, according to the NWLC, they make up one-third of those working at the lowest pay levels.

To be clear, this isn’t about women simply choosing these kinds of jobs — this is about an employment system that actually discourages basic worker protections. In America, in 49 out of 50 states workers are considered "at will" employees, meaning they can be fired at any time for almost any reason that isn’t blatantly discriminatory. As thousands of moms can attest, many companies consider missing work to care for a sick child cause for termination. It’s hard to imagine that those same bosses would be fine with a worker missing a day to make a political statement.

So what would A Day Without A Woman look like for poor and low-income mothers? It’s difficult to tell at this point. Certainly, missing a day of work would mean a direct hit to the budgets of many women and the possibility that others might actually be fired for participating. And so far, the organizers haven’t said much about that reality.

To be fair, in the Instagram post announcing the general strike, the Women’s March organizers said that details for the strike will be released in the weeks to come, including “more information on what actions on that day can look like for you.” That could be read as a subtle acknowledgement that a general strike — millions of women not showing up for work and shutting down their businesses for an entire day — may not be possible for everyone.

Still, it’s frustrating that after the early criticism that ultimately reshaped the Women’s March, the very first statements about the general strike center those women with economic and racial privilege. Despite all the difficult conversations around the dangers of leaving an entire population of women behind in order to tell the stories of a few, here we are again. Actually, at this point it’s more than frustrating. It’s exhausting.