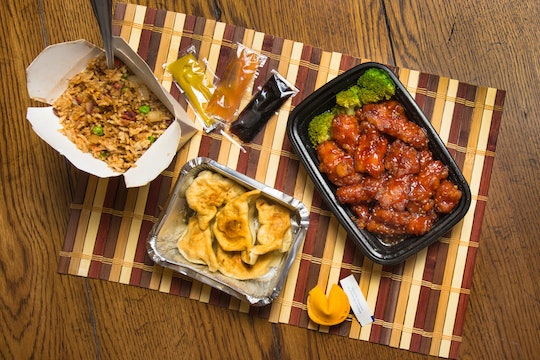 The One Chinese Food Order To Induce Labor

If you're on the verge of going into labor, the waiting game can feel longer than the rest of your pregnancy put together. Many moms turn to at-home methods of induction hoping to at least speed the process along. Eating spicy food is one legendary way to kickstart labor, and although whether or not it has scientific backing, it can't hurt to try. If Asian cuisine is your weapon of choice, you'll want to know about the one Chinese food order to induce labor. Granted, most Chinese restaurants pride themselves on the level of spice they can offer their customers, so ordering whatever you like with added spice will probably do the trick.

However, there is one dish that, in most Chinese restaurants, is considered to have a substantial kick. According to the travel blog Sapore di China, Szechuan dishes are generally spicy, even in our Americanized versions. Traditionally, Sichuan cuisine is famous for its variety of flavors and unique spice. In America, although the recipes usually won't be the same as the traditional versions, ordering Szechuan chicken or beef will be spicy.

Szechuan dishes typically are made with garlic, chili peppers, and Sichuan peppers, which might just be enough to get your uterus (and probably the rest of your system) contracting. If it's not spicy enough for your taste, you can always ask for it to be made extra — but be prepared for quite a kick.

Although, according to an article from Time, at-home induction methods have yet to be proven effective and researchers are uncertain about why they may or may not work for some women, many pregnant mothers swear that the last spicy meal they ate was just what their body needed to get labor contractions started. And truth be told, regardless of whether or not the science behind the methods is all there, taking matters into your own hands (or fork) beats waiting at home for your water to break.