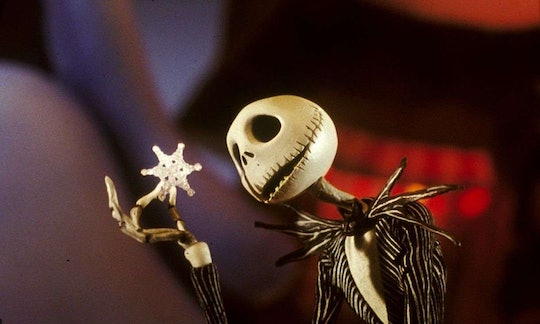 It's a debate for the ages whether The Nightmare Before Christmas is a Halloween movie or a Christmas movie. Personally, I think this debate is silly because I consider it both, and therefore have an excuse to watch it during both seasons every year. So imagine my surprise when I recently uncovered the one detail about The Nightmare Before Christmas that you probably missed as a kid. You're welcome for illuminating this very important issue, which hopefully will not affect your viewing pleasure from here on out.

Everyone knows this movie as the charming story of what happens when the macabre world of Halloween collides with the holly jolly of Christmas. It all starts when Jack Skeleton, the Pumpkin King of Halloween Town, discovers a magical forest with doors to the towns of all the other holidays. He finds himself in Christmas Town where everything is warm and delightful. The requisite hijinks ensue when Jack attempts to kidnap Santa Claus and have the ghoulish citizens of Halloween Town take over Christmas. In the magical forest you probably noticed doors to a bunch of other holidays, including Easter, Independence Day, and Thanksgiving. But you probably didn't notice one big holiday that was missing. Now I want to know why this is. Pay attention to the first part of the intro.

There is one particular holiday that's celebrated all over the entire world that is not in this montage. Why is there no New Year's door? There's a St. Patrick's Day door, but no New Year's Day! St. Patrick's Day is not even a legal national holiday in America, and is celebrated mainly by green-clad college students drinking green beer in the middle of the day. I would like to ask everyone involved in the creation of this film the meaning behind this omission.

Personally, I would be very interested to see a New Year Town. It could be run by Father Time who lives in castle surrounded by a moat made of champagne. The entire place would be decorated by clocks, the townsfolk would throw giant, jubilant parties every night with a daily fireworks display, and the atmosphere would be filled with an uplifting sense of hope for the future. It sounds great, frankly, and I don't understand why it was not included in the forest.

Perhaps Tim Burton did not want to open up a discussion about the passage of time, or introduce the paradox of a never-changing town responsible for bringing about the new year every year. This could understandably be confusing for children. But then again, a feel-good story about a town filled with murderous dead ghouls and ghosts is a little dark for children as well, arguably.

Unfortunately for me, who yes, perhaps spends a little too much time focusing on minor details, it doesn't look like there's going to be a lot of opportunity to correct this egregious oversight. Burton has repeatedly refused to sign off on any sequels for the beloved movie. His contention is that the original work is good as it is, and a story about Jack Skeleton going to Easter Town or wherever would be disrespectful to the purity of the original. "I was always very protective of ['Nightmare'], not to do sequels or things of that kind," Burton said to MTV. "You know, 'Jack visits Thanksgiving world' or other kinds of things, just because I felt the movie had a purity to it and the people that like it." This is a very respectable position and I admire it, but I'm still confused about the lack of New Year's Town.

It was announced in July, however, that there would be a sequel to Nightmare after all, but in Manga form, about Jack's dog Zero getting lost in Christmas Town. Perhaps this will finally answer my New Year's question. Maybe. Please? Now that I've noticed it, I can't stop thinking about it.