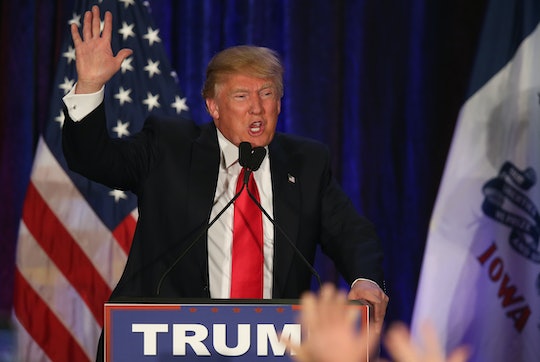 Business-mogul-turned-presidential-hopeful Donald Trump has a penchant for saying he'll help America "win again," according to Salon — but at the Iowa caucuses Monday night, Trump did not win. While he led in polls just before caucusing began in the first state to vote, he ended up trailing behind Cruz's 28 percent by four points. For a contestant who many believed would lead the Republican race for the nomination, second place could be a hard blow — but it was made even worse by one tweet that Trump would probably like you to forget.

Trump's concession speech on Monday night was surprisingly gracious. He thanked the people of Iowa, told them he loved them, then said,

Trump closed his speech by saying he was looking forward to New Hampshire, and gave a somewhat-hopeful boost near the end, remarking, "I think we're going to be proclaiming victory. I hope." His supporters roared.

That concession speech may have been the most gracious and humble has ever Trump been throughout this race for the Republican nomination. However, Twitter doesn't forget so easily, and was quick to jump back into Trump's tweeting history, digging up the following Tweet: