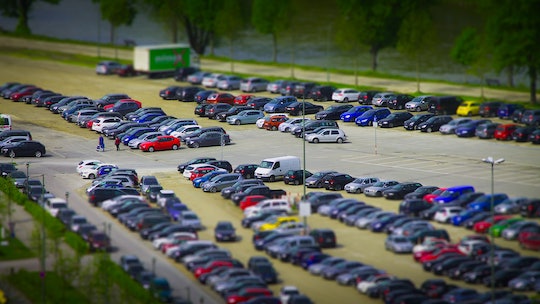 Every year, the sunny days of summer coast in like a wave, promising fun-filled pool days and cookouts. But there's also a much more nefarious mainstay of the season: scorching temperatures that eventually lead to tragic hot car deaths. In many cases, kids end up dying of heatstroke after parents or caretakers simply park their vehicles and walk away, forgetting about the precious cargo in the backseat. Some may not understand just how quickly this situation can turn deadly. Now, in an effort to raise awareness, The Weather Channel has launched a feature all parents should know about to prevent hot car deaths. It's aptly called the "Scorching Car Scale," and it's a simple, sure-to-be-effective reminder for parents to be vigilant.

According to KidsAndCars.org, heat-related outcomes like vehicular heatstroke kill an average of 37 children each year after they're trapped in parked vehicles. Of the more than 716 children who have died this way in the United States since 1998, more than half lost their lives as a result of being forgotten by a caregiver, NoHeatStroke.org reported. Another 28 percent died after entering the vehicle while playing and getting stuck inside.

That's where the Scorching Car Scale comes in. Using the projected high outside temperature of a particular city, the scale shows parents how hot cars there will get after 10 and 30 minutes, according to a Weather Channel press release.

The hope is that seeing this oftentimes-startling information on TV and online will keep the issue front-of-mind for parents who may otherwise not consider the serious implications of leaving a kid in the car.

Many parents simply don't realize just how quickly a car will heat up, Senior Vice President of Live Programming at The Weather Channel Nora Zimmett tells Romper. For example, she says, a car's inside temperature can skyrocket to 109 degrees on an 75-degree day in just a half an hour — and that's enough to cause heatstroke.

The Weather Channel used data from an observational study conducted in California to determine what the car temperatures would be within 10 minutes of a child becoming trapped. "We chose 10 minutes because people think in 10 minute increments ... it’s a really short period of time in people’s minds," Mike Chesterfield, Director of Weather Presentation at The Weather Channel, tells Romper. "... They're not aware that the car is going to heat up so rapidly, and indeed it does."

And those 10 minutes can pose a serious threat to kids who end up trapped: It's enough time for a car's internal temperature to jump to 104 degrees in situations where the outside temperature is 85 degrees, Zimmett says. This is a problem for kids, not just because they're less likely to be able to free themselves when they begin to overheat, but because their body temperatures rise at a rate that's three to five times faster than what's commonly experienced by adults, CNN reported.

Even for Chesterfield, who's also the father of a 3-year-old daughter, the results were "eye-opening."

"When you see the numbers, it hits you just how dangerous it is," he says.

Oftentimes, parents who forget their kids in cars do so because of a change in routine, according to NBC News. There are several strategies you can implement to avoid that outcome, such as leaving a necessity like a shoe or briefcase in the back with the kid. And The Weather Channel hopes that the reminder of how scorching hot it gets in the car will add another layer of protection, as well.

The Weather Channel team came up with the idea for the tool the day before it went live on Thursday, prompted by the news of three additional hot car deaths that happened recently, Zimmett says. But make no mistake — the idea may have been drawn up quickly, but the effects it may have on the public will undoubtedly be long-lasting and immensely important.