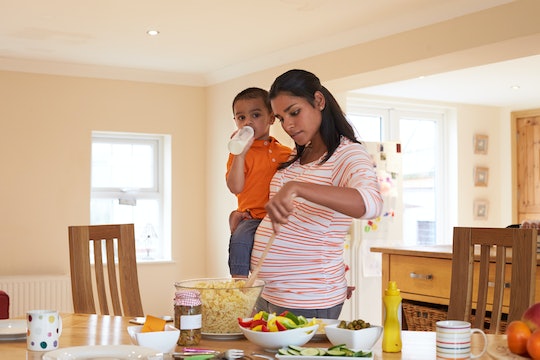 The Pantry Staple To Send You Into Labor

I'll admit that I was one of those obnoxious women who absolutely loved being pregnant, and had an easy time of it. Although I had friends who told harrowing tales of all day "morning" sickness, projectile puking, and even fainting episodes, the worst thing I experienced was some early bloating. But you know what? Even when you have a dream pregnancy like I did, there will come a point when you are absolutely done with it. That's when you start searching for the one food in your pantry that could send you into labor.

During the last month of pregnancy, the weight of my big belly on my petite frame was just getting to be too much for me. I was so excited to go to my 36 week check up and see if I was making any progress toward labor. I was incredibly disappointed when my doctor said there was nothing happening in there, and I immediately began to fear I'd be pregnant forever. Or at least a couple of weeks overdue.

Just a few days later, however, I happened to order a quesadilla for dinner without realizing it was super spicy. After I ate I noticed my baby was really kicking up a storm inside my belly, but I didn't think much of it—until my water broke. It may be an old wives' tale, but according to What to Expect, I'm far from the only mom who believes spicy foods helped induce labor.

You don't have to order takeout to try to get the same effect I did, however. Crushed red pepper is a pantry staple according to Food Network, so there's a decent chance you have some on hand already. You can sprinkle it on pretty much anything you can think of to up the heat factor. Pizza, pasta, noodles, chili— whatever your pregnant belly is already craving. The spicy flavor just might send you into labor.

Although your doctor will probably tell you there's no science behind spicy foods inducing labor, there are some theories as to why so many moms like me see a link. Pregnancy noted that spicy food's tendency to irritate your digestive system might also cause contractions to start. Sprinkling crushed red pepper on your dinner could also cause diarrhea. That in turn can lead to dehydration, which can potentially kick start contractions. Although it may or may not work for you, there's not much harm in trying spicy foods to induce labor, according to the Cleveland Clinic.

Before you try any method of inducing labor on your own, Parents noted that you should be at least 39 weeks pregnant to try inducing. And if you do decide to go the spicy food route, I'd recommend having some antacid on hand for any potential heartburn.