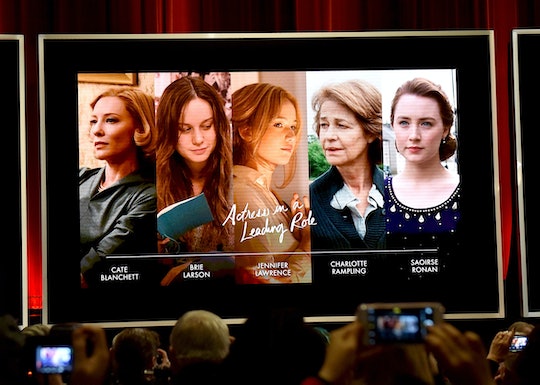 The One Glaring Problem With The 2016 Oscar Nominations

The 2016 Oscar nominations are officially in, announced early Thursday morning during a press conference at the Samuel Goldwyn Theater in Beverly Hills, California. While there were some surprises — Mad Max: Fury Road took home a jaw-dropping 10 nominations — and some returning hopefuls — Leonardo DiCaprio was once again nominated for his role in The Revenant, which marks his sixth Oscar nomination — there was one glaring problem with this year's Oscar nominations: There were no people of color nominated for Oscars in the show's major categories.

While Straight Outta Compton did score a nomination for Best Original Screenplay, out of the 20 nominees for Best Actor, Best Actress, Best Supporting Actor and Best Supporting Actress, not a single one included a man or woman of color within its ranks. It's a shame that the Oscars and the Academy continue to overlook such a vast array of talented actors and actresses, and what's more, it's continually disappointing that more roles aren't available for men and women of color. Visibility begins in the writing stage, long before casting, and it's a shame that ever year, that lesson becomes more and more true.

In her incredibly poignant acceptance speech after taking home an Emmy award for as Annalise Keating in How to Get Away With Murder, Viola Davis beautifully gave context to the struggle of actors and actresses of color with every passing award season. (I know, I know, it was a different award show than the Oscars, but the comments are still incredibly important.) Davis famously quoted Harriet Tubman when she said:

This year's nominee pool is further reminder that for the Academy, the line is still alive and well.

The whitewashing of the Oscars has been a long-standing issue within the award show. Before announcing the nominees for Best Picture during the 60 Academy Awards in 1988, Eddie Murphy called out the Academy for failing to recognize black actors and actresses. Murphy said:

I just feel that we have to be recognized as people. I’m going to give this award, but black people will not ride the caboose of society and we will not bring up the rear anymore.

In fact, racism and lack of diversity within Hollywood itself has been a growing topic of discussion by mainstream media. (It's about time.) Selma star and African-American actor David Oyelowo was snubbed at the Oscars last year, and Kanye West has been known to call out The Grammys for their failure to celebrate black musical artists. Recently, Master of None star Aziz Ansari penned an eloquent New York Times essay on Hollywood's diversity problem. Though he acknowledged that small strides have been made to work on the issue, he lamented:

But I still wonder if we are trying hard enough.

And it's true. Unfortunately, it doesn't look that problem is going to be fixed anytime soon, especially by the Oscars.

Oscar nomination viewers were quick to take to Twitter and share their disappointment as well. The lack of diversity was so obvious, it was difficult to, well, talk about anything else.