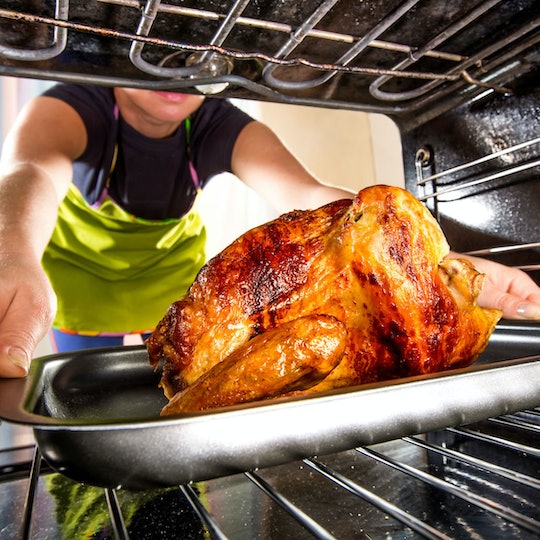 No matter how creamy the mashed potatoes are, how fluffy the rolls, or how crisp the pumpkin pie crust gets, on Thanksgiving it’s really the turkey that’s the centerpiece of the whole shebang. And it’s also the portion of the dinner that has the highest potential for screw-ups. Luckily, there’s at least one genius Thanksgiving cooking hack that’s surprisingly not as well-known, considering how clever it is.

Yes, Thanksgiving cooking hacks reign far and wide across the web, but not many of them focus on the toughest part of the evening — getting that bird done just right, and within the right timeframe. From the long cooking time to working with a meat thermometer to carving it just right, there’s a lot that can go wrong when preparing the star of the show for Turkey Day. (Oh, and let’s not forget the biggest battle of all: combatting dryness. Yikes.) But thanks to this genius turkey-cooking trick, it’s easy to have better turkey this year with exactly ZERO extra work on your part. It will, however, require a little advance planning. OK, are you ready? Because it’s a good one.

Rather than getting a huge, bulky turkey with enough girth to feed your whole extended family, try buying two smaller birds that add up to a larger one. Simple, right? But why is this the best option?

Well, one big issue with getting the turkey to come out perfectly is that it’s sometimes impossible to predict how evenly such a large bird is going to cook in your oven, or how long it will take, which leaves you constantly checking and rechecking it while you go about making other things.Two birds will not only take up the same amount of room in your oven, but because you’ll be buying the same amount of meat as you would for a larger bird, they’ll take the same amount of time to cook. You’ll also be much less likely to dry out your turkey since you’re dividing the roasting among two birds with equal portions of meat to cover, rather than one giant one that needs lots heat to go all the way through.

So this is where the advance planning comes in. Since you’ll be grabbing two instead of one this year, you’ll have to make sure you get your birds in plenty of time so that you’re not fighting in the freezer aisle for those last few remaining turkeys. (Which would end up being even more stressful than the day itself.)

The next step here is to make sure you get the right amount of turkey to go around, depending on how many relatives you’ll have stopping by (not to mention plus ones.) As far as servings per guest goes, The Kitchn recommends having at least one pound per person, while experts on Food52 recommend about a pound and a half. Martha Stewart, however, notes that smaller birds (ones that are twelve pounds or less) have a “smaller meat-to-bone-ratio,” so you should allow two pounds per person. To stay on the safe side, we recommend going with Stewart’s suggestion, which will also allow room for leftovers should everyone not get their fill.

Still worried you’re not going to get the right amount? Let’s do some turkey math! Let’s assume you’re going for 12 pound birds to maximize the amount of meat you’re getting on a smaller bird. So:

And so on. Party larger than twelve? Go for a slightly larger bird with one of your turkeys (say, 13 or 14 pounds) and do the math to see if it works. Oh, and eye the birds to make sure they both will fit in your oven, of course.

And there you have it—with only a little extra forethought (that is—going to the grocery store with ample time to grab the birds you want), you won’t be freaking out over whether or not the turkey is cooking all the way through. Because you’ll have two turkeys, you’ll be able to much more easily manage your star of the show so that everyone gets meat cooked just the way they like it. Less stress, and more time to party and celebrate with loved ones? We couldn’t think of a better way to do Thanksgiving this year.