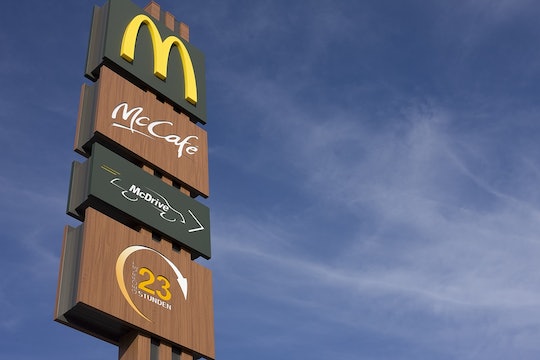 As your pregnancy comes to a close, it's completely normal to want to do everything in your power to get the ball rolling. At-home induction methods, while not necessarily backed by science, have worked for many a mother hoping to go into labor sooner rather than later. Eating spicy food is one of the most tried and true methods when it comes to at-home inductions and, since it can't really do any harm (other than a bout of heartburn,) it's worth a shot. If you tend to eat on the go, looking for, say, the one McDonalds order to help induce labor, can be a daunting task. But if the golden arches is your weapon of choice, you might be in luck, as far as spicy food goes.

Although you'll be hard pressed to find an option on the menu that is both healthy and labor-inducing-spicy, making an exception for the sake of kickstarting contractions seems worthwhile. But before diving into the specifics, it helps to know the reasoning behind the spicy food/labor phenomenon.

Although there isn't any concrete evidence linking the two, Baby Center noted that some experts believe eating spicy foods can cause the uterus (and your digestive system) to contract, thereby starting labor-inducing contractions.

Now, back to getting your labor started at Mickey D's. According to the Trillist (a reliable source for all things thrill-inducing,) the Spicy McChicken Sandwich is the spiciest food on their menu, meaning it is the most likely to get things moving (perhaps in more ways than one.) Thriller reported that the sandwich "has spice baked deep into the essence of the patty" meaning that it's hard to escape the spice, which, in this case, is a good thing.

Although there are likely restaurants that specialize in foods that are even spicier than this fast food delicacy, sometimes you've got to work with what's readily available — like if you're on a road trip, in the middle of a long layover, or need to get your baby out ASAP.