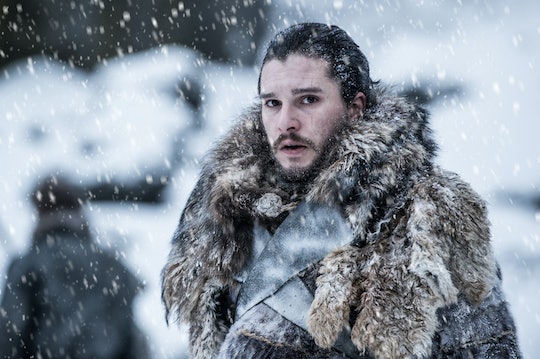 I don't know about the rest of you, but when I was a child my mother always told me that there are two sides to every story. I guess that includes Game of Thrones too. Which is why I was intrigued when I stumbled upon one theory about the Night King on Game of Thrones that paints a very different picture of this icy villain, — though fans will definitely find it difficult to believe. Going into this with an open mind, I'd like to pose the possibility that the Night King has just been, well, misunderstood. Is there a chance that everyone is judging him too harshly and he's actually got a mission beyond just total destruction and chaos? Just heart me out on this one.

In Bran's vision, viewers saw the Children of the Forest plunge a dragonglass dagger into the heart of some poor unsuspecting human man, who then became the Night King, introducing a race of evil undead to the world. They did this in the hopes of defeating humans, with whom they were at war. Considering how the humans of this story seem to spend most of their time torturing and killing one another, you can kind of see why the Children wanted to get rid of them. But perhaps the Night King has been getting a bad rap. Maybe he just wants to live free of the North where he and his minions have been trapped for thousands of years.

It's still a little unclear what the Night King's actual agenda is. Death and destruction, yes, but that isn't all that different from, say, Cersei Lannister. Does the Night King just want to rule Westeros too? What will happen if he wins and what does he actually want? Maybe he's even just trying to stop humanity from its own destruction (perhaps seeing the outcome if Cersei and Daenerys are allowed to go to war with each other). So maybe his intention is the actually save the world? OK, fine, that may be a bit of a stretch, but you never know with this show!

Showrunners David Benioff and D.B. Weiss have said that the Night King isn't so much a villain the way that Ramsey Bolton or King Joffrey were. The Night King's villainy is more symbolic than anything else.

In an interview with Deadline, Weiss said,

I don’t think of the Night King as a villain as much as, Death. He is not like Joffrey, or Ramses. He’s not really human anymore. To me, evil comes when you have a choice between that and good, and you choose the wrong way. The Night King doesn’t have a choice; he was created that way, and that’s what he is. In some ways, he’s just death, coming for everyone in the story, coming for all of us.

This would mean that Jon Snow and his squad are really trying to fight Death, which is kind of impossible. I'm trying, but I'm still finding it difficult to find a sympathetic creature in the Night King, and I can't imagine his army will win in the end. So what happens when death is defeated? I guess we'll have to wait to find out.