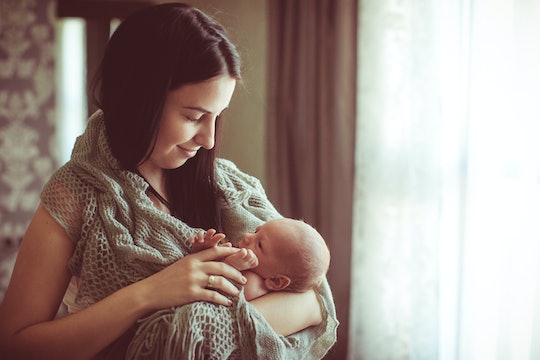 My one and only breastfeeding experience was nothing short of terrible. I was a brand new, 24-year-old mother, optimistic about where this journey might take me but naive about the actual process. I tried and tried to make nursing a newborn work, but, ultimately, I gave up. When I think back on my breastfeeding experience, I realize there's a piece of advice I ignored that could've actually helped me breastfeed longer. I mean, how demoralizing is that, right? It's not easy to look back, examine your past, and realize that if you had made one tiny change — one different but ultimately significant decision — your experiences would be undeniably different, and probably for the better. Then again, taking stock of my past and learning from my mistakes is how I become the mother my children need me to be. It's difficult, to be sure, but it's also necessary. If I want to be better, I have to do the work.

My mother breastfed her two children, just as her mother did her kids, too. In fact, I think every mother in my family has nursed her newborns. Pumping breast milk so someone else could take over feedings, or transitioning to formula, wasn't considered "standard feeding procedure" in my family. Actually, the way my mom tells it, there's no such thing as breastfeeding not working out. Instead moms suffered through it, no matter what issues arose, until they apparently willed their bodies to feed their babies.

It's not easy to look back, examine your past, and realize that if you had made one tiny change your experiences would be undeniably different, and probably for the better.

There was no complaining, backing out, or sympathy for those that highlighted the difficulties of breastfeeding or ultimately switched to formula. It was simply the way of the land and, unfortunately, a lot of mothers in my family (and many other families) suffered because of it — including my own.

My mom has spoken a few times about how hellish breastfeeding me was. She became depressed, had a difficult time bonding with me, and oftentimes couldn't muster the energy to even go through the motions of parenting. She's emphasized her mental state more than a few times, and because I endured similar symptoms, it's clear to me that she had undiagnosed postpartum depression (PPD). Then I listened to my grandmother share stories of nursing and realized she, too, had PPD. But instead of seeking out medical treatment or help, the women in my family pushed forward, suffering in silence along the way.

I thought my decision to become a mother was, essentially, a terrible mistake.

I initially started my breastfeeding journey hopeful. I was optimistic I could "get it right" and that my daughter and I would reap the benefits of nursing that so many other moms couldn't seem to stop talking about. But as each day brought more and more nursing difficulties, I started to feel discouraged. Then I, just like my mother before me, became depressed. Then my anxiety ate away at me and, eventually, I couldn't sit with my baby for longer than a few minutes. I cried a lot, my eating habits changed, and I realized I still, weeks after she was born, hadn't bonded with my baby.

Instead of seeing myself as a failure who did everything wrong, I finally saw myself and my parenting abilities from a different point-of-view.

For months I struggled with these feelings of sadness, isolation, and loneliness. I thought my decision to become a mother was, essentially, a terrible mistake. Clearly I was terrible at it, so how could my baby ever love me? How could my baby expect me to care for her when I couldn't even breastfeed her? That's the thing about postpartum depression: it makes you feel as though you'll never, ever, be good enough for your child. I had irrational fears that someone would take my daughter away, and valid feelings of guilt for not breastfeeding through the pain the way my grandmother and mother did.

And then someone said something to me that changed my entire life. During a postpartum check-up with my doctor, I was told that no one — not my mother, my grandmother, and certainly not me — should suffer through postpartum depression in silence. I was told that I didn't have to sit with these feelings of guilt and inadequacy all by myself. I didn't have to live my life in a perpetual state of physical and emotional pain just to prove I was a good mother.

And just like that — and with the help of medication and the aid of formula — my perspective changed. Instead of seeing myself as a failure who did everything wrong, I finally saw myself and my parenting abilities from a different point-of-view. I was doing everything I possibly could for my daughter, and I did pretty well considering I was also struggling with postpartum depression. While my daughter and I didn't bond for some time, she was healthy and thriving. And while my mental state was in dire need of therapy and medication, I did what I thought was best for my brand new baby every single time. I know now I could've continued my breastfeeding attempts if I'd not ignored the warning signs of PPD and sought help sooner, but I also did what I thought was best with the knowledge I had. That's all any of us parents can do.

I didn't have to live my life in a perpetual state of physical and emotional pain just to prove I was a good mother.

Now my "baby" is almost 11 years old, and she's wonderful. My inability to breastfeed her for as long as I had hoped, and my experience with postpartum depression, didn't keep her from becoming the magnificent human being I knew she would be. So if you're in a similar position, and don't quite feel right after childbirth and/or after numerous breastfeeding attempts, take it from someone who waited far too long to admit there was a problem — you're feelings are valid and real. Confronting them now will save you the heartache later. You do not need to suffer in silence, and you do not need to go at it alone.

You are not alone.

More Like This
Breastfeeding & Sex: Experts Explain What To Expect
Festive Mommy & Me Holiday Nail Ideas To Try
The “Tripledemic” Is Scary, But I Feel Less Helpless When I Wear A Mask
101 Advent Calendar Activities, From Books To Read To Cookies To Bake