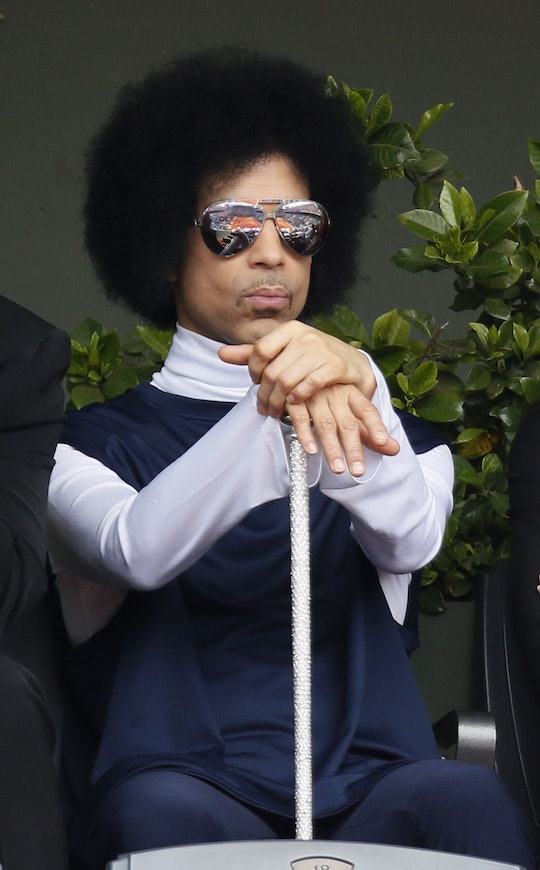 Although world is still reeling from news that beloved artist Prince is dead at 57 years old, heeling can be found by listening to the star's most important songs and watching (and re-watching) some of his most mind-blowing performances. And what better way to pay homage to a soul who helped uproot, change, and better the world that by watching him storm the stage in all his majesty? This one Prince performance, especially, happens to encapsulate everything that the singer was: bold, awe-inspiring, jaw-dropping, and 100-percent badass.

The singer performed at the Super Bowl XLI halftime show, and the scene couldn't have been more fitting (or less conducive) to an outdoor, halftime performance that contained all the bells and whistles. What I love most about the show was how neatly Prince made the chaos surrounding him fit into his performance. He used the downpour to his advantage in such a way that you wouldn't have been wrong to assume that Prince told the clouds to open, and they just did his bidding. The game took place in Miami at Dolphin Stadium, and though the Indianapolis Colts and the Chicago Bears were duking out, all that mattered was the mind at work on stage.

The halftime performance lineup included bits of "We Will Rock You," "Let's Go Crazy," "Baby I'm a Star," "Proud Mary," "All Along the Watchtower," "Best of You," and, of course. "Purple Rain." As you watch the video, one of the men involved with the show talks about the panic involved — as it poured the day of the game (it apparently hadn't ever rained on a Super Bowl game in 40 years) — Prince was using four electric guitars on stage and the stage was constructed using slick tile that, in a downpour, doesn't just sound like a liability, it absolutely is one. Only you'd never suspect even a trickle of fear on any part of the artist during any second of the show. And if you're looking for a moment that speaks to who Prince was not only as a person but also as an entertainer, there are likely thousands of shows and moments that come to mind. But this moment — this ability to look every kind of adversity in the face and say "eh, f*ck it — this is purely Prince.

Jon Pareles, the senior music critic for the New York Times, is featured in the recap video discussing how groundbreaking it was to see an artist perform on such an all-eyes-on-me stage and not play or promote a litany of his own music. Pareles says, perfectly, what so many have seen and felt when they watch Prince:

It's profound, and it's loud, and it's funky, and it's just one performer shaking the entire world.

And today, as we all turn inward once again to celebrate the life, love, and the artistry of one incredible performer's impact, it's those words we should remember. Even in death, Prince is one performer, still shaking the world.